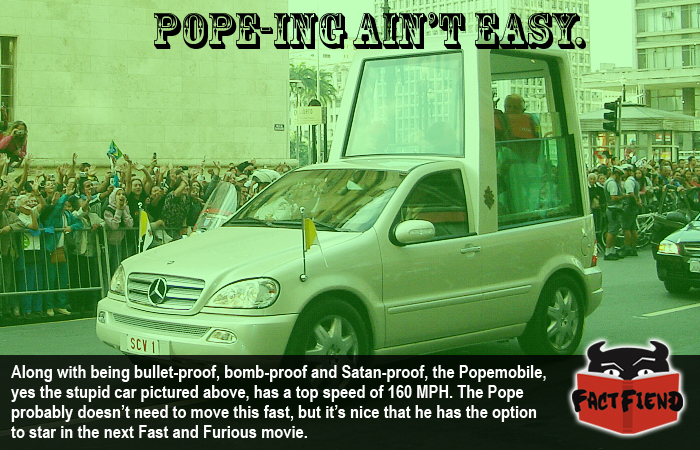 The Popemobile is the Pope’s personal mode of transport and along with looking fly as hell, it’s also pretty much everything-proof up-to and including harsh words about the Pope’s bitchin’ Pope robes. Though the Popemobile rarely travels faster than 10MPH, it’s actual top speed is 16 times higher than that, because Pope’s apparently hate not having the option to turn into a blur.

The Popemobile, a word we never want to stop typing, is a term given to many vehicles. Though in the past the Pope travelled in an open top car, concerns about his safety and a strong breeze knocking over his Pope hat have resulted in the vehicle seeing a number of improvements. Mainly bullet-proof glass so thick insects refer to it as “Omega Weapon” in hushed tones.

On top of this, the Popemobile also boasts resistances to both bombs and biological attack, you know, in case the Pope really wants to show off. But by far the most surprising feature of the Popemobile is its top speed. 160MPH.

This is surprising because the Popemobile virtually never travels faster than 6MPH, but for some reason we hope can only be explained by a drunken engineer making revving noises while wearing a crudely fashioned Pope hat, it was decided that the Popemobile should be able to travel at speeds in exces of 150MPH. We don’t know what situation could possibly arise that would require the Pope to move at this speed, but hot damn do we want to find out what it is and make a movie about it.