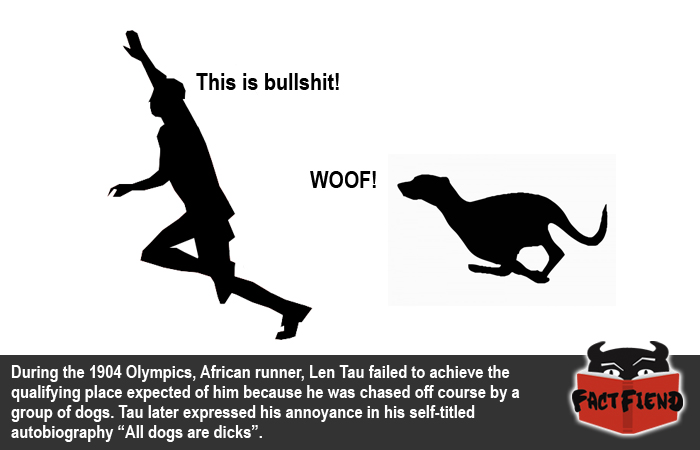 There are so many awesome stories to come out of the Olympics, both modern and from antiquity that it’d be impossible to list them all here. For example, did you know Melankomas of Caria never once threw a punch in his entire boxing career? Instead he did nothing but slip his opponent’s punches like a boss until they fainted. The Olympics are full of cool shit like that and today we want to talk about one of the more bizarre stories to come from them, Len Tau being chased by a bunch of dogs.

Though you’ve likely never heard of Len Tau until we mentioned him just then, he’s an important figure in the history of sport as he was one of the first black African runners in history to take part in a modern Olympic event. The event in question was the 1904 summer Olympic marathon held in St Louis, Missouri, during which Tau was essentially robbed of a legitimately high placing by a pack of dogs.

However before getting to the part with the doggies (AKA, the best part) we should talk a little about how Tua and his good friend Mashiani came to compete in the first place. Because it’s actually a pretty cool story in of itself.

Oddly, despite the pair’s impressive ability to run in a straight line until everyone around them spoke a different language, neither man was actually a trained athlete. In fact before becoming Olympic runners, both men were originally performers in a nearby sideshow.

In a huge stroke of luck, the pair managed to catch the eye of a member of the visiting Olympic committee when they entered a running event on a whim and sprinted for a mile straight. The committee member was so impressed that he immediately offered each man a place to prove his worth on the world stage. An offer both men were happy to accept.

Though each man was apparently given a pair of brand new running shoes in which to compete before their big Olympic debut, both discarded them in favor of running bare foot. Presumably in a case of one-upmanship to decide which one of them had the biggest running penis.

Tau initially showed promise after the starting whistle blew, with some speculating that he was a shoe-in to place somewhere in the top three if not win the event outright, early into the race he ran into trouble in the shape of a pack of vicious dogs. Why the dogs decided to chase literally one of the only two black guys present is just further proof of our “all dogs are racists” theory, but it’s not the time or place to discuss that so we’ll move on.

According to official reports, the dogs chased Tau around a mile off course, forcing him to take a massive detour to avoid suffering facial maul wounds. But here’s the best part, even though Len Tau literally ran a mile further than everyone else, he finished 9th. If you don’t think that sounds impressive, we should probably point out there were 29 other racers competing in this event, meaning Tau placed better than almost 66% of other racers despite running a mile further than they all did. It’s believed that if Tau wasn’t chased off course, he could have easily won the entire event. For the curious, Tau’s friend Mashiani managed to place 12th.

And that ladies and gentlmen is the unknown, yet brilliant story of how Len Tau was dicked over by a pack of dogs and robbed of his rightful place in the history books.

When Greece first tried to bring the Olympics back one of the events involved standing on a greased sack. Okay, they were weird as well as awesome.