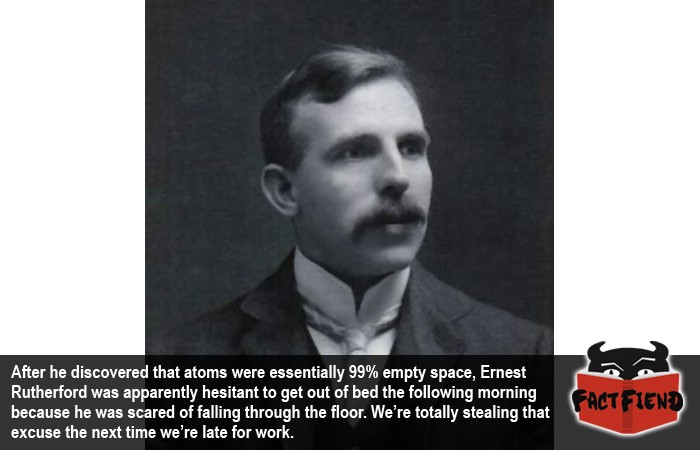 Ernest Rutherford or Lord Rutherford of Nelson as he was known when fine-ass ladies were around, was a physicist/chemist perhaps best remembered for discovering that atoms are mostly empty space and that radioactive half-life was totally a thing.

Before we get into that though, we need to massage Rutherford’s ghostly ego a bit more because this guy was a total science pimp, seriously, this guy is known as the  “Father of nuclear physics“. You couldn’t earn a cooler nickname than that if you only ever travelled via moonwalk while wearing tiger-skin pants.

Rutherford is probably best known by people not intimately familiar with nuclear physics (so, like 5% of our audience?) for his “Gold foil experiment”, for which he acquired a flattened leaf of solid gold and bombarded the shit out of it with particles. Which is exactly as cool and twice as fabulous as you’re imagining it to be.

During the course of his experiment though, Rutherford noticed something, odd. Virtually every particle he shot at his sheet of gold were detected by his instruments, suggesting that they were able to travel through the gold without anything getting in their way, like, at all. To make things more confusing, virtually none of the particles he fired were even being so much as deflected, suggesting that they were moving straight through the gold like there was nothing inside of it. This was entirely unexpected and deeply worrying because it indicated that, contrary to what Rutherford had originally hypothesized, there was a shit-ton of empty space inside of the atoms. If you’re having a little trouble picturing what we’re trying to say, here’s Rutherford’s findings in diagram form.

For anyone having a little trouble making heads or tails of that image, basically it shows the path of the particles Rutherford was firing and his observed results, mainly that the majority of them passed straight through the atoms inside the gold sheet, indicating that they were mostly empty space.

Now this is where the story gets adorable, because the legend goes that after discovering this fact  Rutherford was totally freaked out to learn that approximately 99% of the entire physical world he was standing in was composed of nothing but empty space. To make it even worse, Rutherford was the first person to make this discovery, meaning he was literally the only person on the planet who was aware of this fact at that point in time.

Rutherford was reportedly so freaked out that when awoke the next morning, upon trying to climb out of bed, Rutherford stopped his foot from hitting the floor and climbed back into bed, purely because he was scared his foot would slip through his floorboards, because hell, they were technically 99% empty freaking space after all. If you really think about it, the fraction of Rutherford’s floor that physically existed was technically a statistical anomaly, we’re not surprised the guy was scared to climb out of bed.

As for why he didn’t think he’d slip through the atoms making up his bed, we’re guessing the part of our brain that makes us think hiding under the covers would stop monsters when we’re kids was working its god-damn ass off in Rutherford’s brain that day. Eventually, sense prevailed and Rutherford did climb out of bed and changed the face of physics as we know it instead of hiding and crying until he died of starvation like we probably would have.