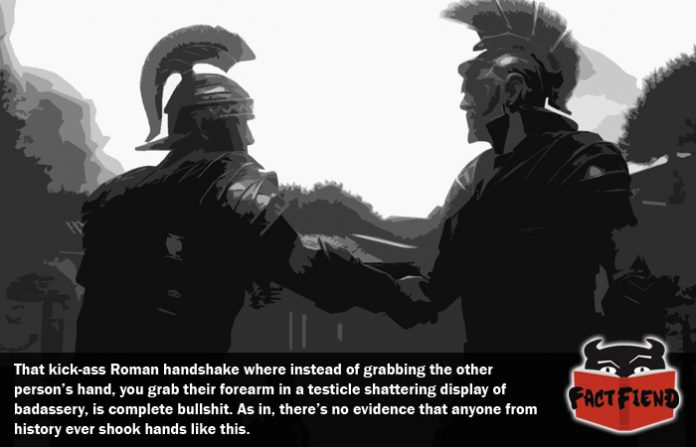 According to experts, the handshake as we know has existed it for several millennia and the gesture has been a custom employed by nearly every known society throughout history. According to TV though, that’s all bullshit and ancient people actually shook hands by vigorously clasping each others forearms like they’re trying to snap it the fuck off, a claim various shows continue to make despite a total absence of any proof whatsoever.

If you’ve ever watched the show Spartacus or indeed any TV program or film starring burly, half-naked men with oiled nipples, you’ve probably seen two characters acknowledge one another by firmly grasping each other by the forearm in a dick-hardening display of testosterone.

This alternate, more intimate take on the handshake has become quite popular online, particularly with guys in body-building forums who seem especially annoyed that they don’t have an excuse to feel up another guys forearms while saying hello. In fact, some people want to bring this gesture back, insisting that it’s the proper way for men to greet on another because shit, the Roman’s did it and look how cool their outfits were?

Various sources claim that the forearm handshake dates back to the days ancient Rome where it supposedly existed as a way to check for concealed weapons in the other person’s sleeve. Which roughly falls in line with the accepted reason for the existence of the regular handshake, that it was a gesture conferring mutual respect between two parties and was a non-verbal way of two men communicating that they wouldn’t stab each other in the face.

Although the explanation for the forearm handshake sounds reasonable enough, actual experts don’t really buy it, mainly because there isn’t a single documented example of any person from Roman times or earlier ever shaking hands this way. In contrast, there are several well preserved examples showing that they did shake hands the normal way.

But here’s the thing, the handshake isn’t how Roman’s greeted one another, at least not soldiers anyway. While handshakes did exist as a way of sealing deals and as a gesture of equality between parties, soldiers probably greeted each other like this …

That’s something called the Roman Salute and it is believed to be the way Roman soldiers would greet one another. Sadly, the exact mechanics of the salute have been lost to time (only descriptions of it remain and the paintings we have depicting it are from after the fall of the Roman empire) so we don’t know exactly what it would look like, but here’s one asshole’s best guess.

Yes, Roman soldiers more than likely greeted one another by doing the fucking Nazi salute, explaining why it’s not really something you see in Spartacus.

So where did TV shows get the idea that Roman men actually shook hands by roughly grasping each others forearms and maintaining unflinching, possibly flirtatious eye contact? Well, the best guess of experts is that it was something started by overly flamboyant theatre actors wanting to make handshakes look more dramatic.

In other words, this gesture burly gym bros on the internet are clinging to as the proper way for real men to greet one another, actually has it’s origins in the world of theatre and was likely created by an actor wanting to make his performance as a Roman Centurion look as fabulous as possible.