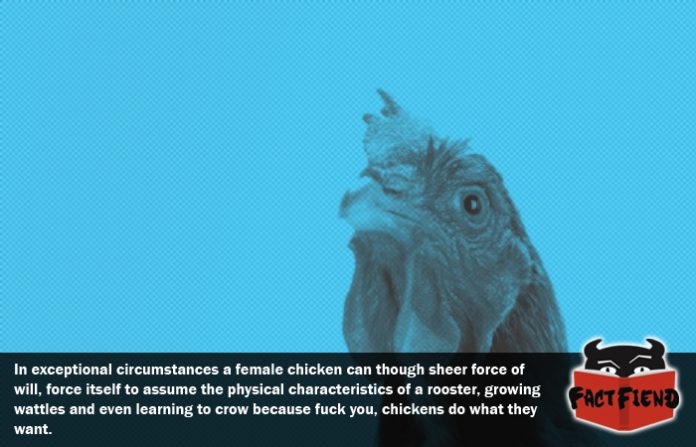 Chickens are a a noble, delicious creature commonly found in nugget form at your local McDonald’s. Like the nuggets found at McDonald’s wild, pre-nugget chickens occasionally come bundled with a set of testicles you didn’t expect to find.

Though exceptionally rare and seldom observed, chickens are one of a few creatures on Earth that are able to change sex. For example, consider the case of Gertie the hen who in 2011 suddenly stopped laying eggs, grew a kick-ass chicken mohawk, began acting like a rooster and is now known as Bertie.

Gertie’s, we mean, Bertie’s owners were initially dumbfounded by the sudden change and much of the world media covering the story assumed it was a hoax. Right up until poultry experts came swaggering in dick-first and explained that the change was perfectly natural albeit unusual, before leaving to continue walking the lonely path of a chicken expert.

Chickens can do this thanks to a unique quirk of their physiology that instead of two functional ovaries, gives them one ovary and an undeveloped sex organ that can develop into either a testicle or an ovary. Normally this undeveloped ovotestis as it’s called in scientific literature remains dormant for the entirety of an chicken’s life. However in some circumstances, usually prompted by illness or stress, the organ will begin to secrete male hormones into the bird’s body, prompting it to take on the physical characteristics of a rooster.

While the bird cannot breed, it for all intents and purposes becomes male in every other sense of the word, developing male genitals and a rooster’s natural inclination to scream at the sun each and every dawn. Chickens that undergo this change will also become territorial and have a much greater chance of being mistaken for a box of cornflakes at 40 paces. 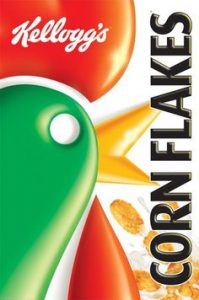 Perhaps the most unusual aspect of this bizarre facet of nature is that it only goes one way. In that while a chicken can turn into a rooster, a rooster can never turn into a chicken. This is because only females possess the aforementioned ovotestis, limiting the ability to enter the chicken equivalent of the witness protection service solely to females.