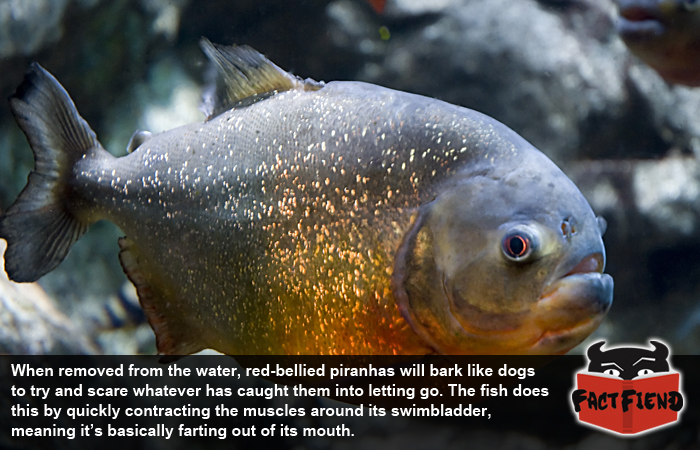 If the media made about them is to be believed, piranhas are like tiny swimming blenders that can gnaw off a stray finger or limb in seconds. In reality though, the fish are timid, cowards creatures that bark like those annoying weiner dogs or someone reading this’ ex-girlfriend.

By contracting the muscles around their swimbladder, a gas-filled organ unique to fish that allows them to remain buoyant in water, piranha are able to make a number of vocalisations ranging from growls to short yelps not unlike the sound made when an elf farts underwater. In addition to this, piranha can also snap their jaws together with such force that their teeth make loud a loud snapping noise capable of withering even the mightiest of erections.

In regards to the barking and growling thing, scientists didn’t actually believe that piranha were able to do this for the longest time until the number of anecdotal stories from fishermen saying that they’d totally heard a school of piranha threaten to bite their dick off in Morse code became too many to ignore.

In 2011, Dutch scientists became the first to record the sound of a piranha’s bark when they did something no scientist has ever done before and stuck a microphone instead of a steak or beef scented candle into a tank filled with them and the result was, well, adorable. The noises made by piranha in the video have probably done more to ruin their reputation as a badass murder-fish than any shitty 3D movie ever could and it gets worse you realise that they make the noise by basically forcing a burst of air from an internal bladder out of their mouth, meaning it should probably be called a fart-scream instead of a bark, but hey, we’re not scientists. We are however really excited to have a legitimate excuse to link to this image of Caitlin from The Flash screaming at a giant rubber piranha in a bathtub that we’re going to provide no context for. 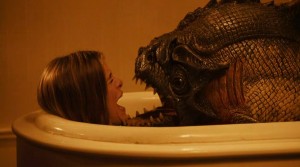