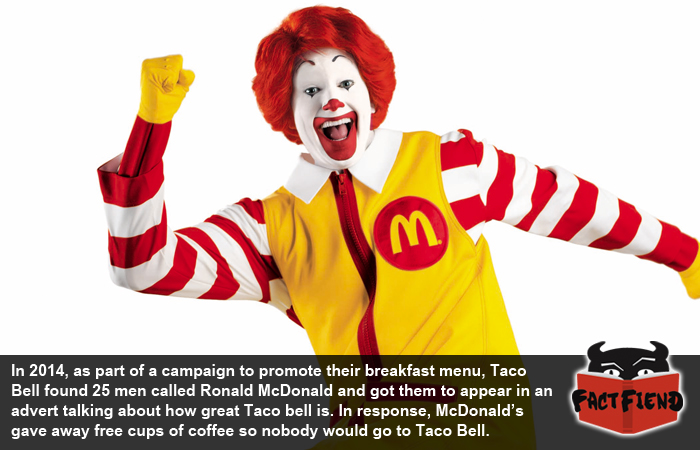 McDonald’s has pretty much owned the “Being a fat shit at breakfast” demographic for years thanks to their ever popular breakfast menu, or at least they did until everyone else decided that McDonald’s needed to be taken down a peg and started getting in on the breakfast game too and arguably the best potshot taken at McDonald’s came from Taco Bell.

In short, in 2014 Taco Bell began toying with the idea of a breakfast menu which involved things like breakfast burritos and waffle tacos which are an unholy trifecta of reconstituted meat products, egg and everything you’ve ever done wrong in the past.

To launch the campaign Taco Bell, who’ve always had just huge balls when it comes to advertising, decided to throw out any pretence that they weren’t introducing the menu to directly compete with McDonald’s went out and found as many people they could with the name of the iconic, dead-eyed clown they insist is their mascot, Ronald McDonald and got them to talk about how great Taco Bell is on camera.

To really rub it in, Taco Bell included a small disclaimer partway through the ad informing customers that although none of the Ronald’s they paid to talk mad shit about every fast food breakfast menu in the country had anything to do with that McDonald’s they sure as hell enjoyed doing it. Taco Bell also included choice quotes about their breakfast menu in the video, paraphrased from and helpfully attributed to, Ronald Fucking McDonald.

As you can imagine, when the ad was released it was circulated widely online and discussed on a multitude of websites who realised they could get easy views by linking to it and writing 200 words that basically doubled as a synonym for “#epicwin” below it and McDonald’s were fucking pissed to the point the blankly refused to make a comment about it when asked.

In what experts agreed was almost certainly a coordinated effort by McDonald’s to kick Taco Bell’s campaign square in dick, released a statement saying they were going to be offering free coffee days after Taco Bell’s breakfast menu ad aired.  This was a big deal because it marked one of the few times in McDonald’s history they’ve offered free, well, anything to customers without an additional provision of forcing them to buy something else first and it marked the first time they’d ever given away free coffee, typically one of the most popular items on its menu anyway.

If you’ve driven past a Taco Bell at any point in the last, erm, years, you’ve probably realised that they’re still selling orange juice that costs more Mountain Dew and sweet tacos covered in fried pig ass and so it’s probably clear that McDonald’s’ gambit of giving away free caffeinated turd water didn’t work and as a result, places like Taco Bell have steadily been eating into the profits. This has forced the company to make more and more desperate moves to recapture the demographic places like Taco Bell have captured by trying to compete with them on the place they punch all kinds of sack, social media. Which they inexplicably tried to do by bringing back Ronald McDonald (because who doesn’t love clowns?) and turning the Hamburglar into a ethnically ambiguous homosexual Green Hornet cosplayer. 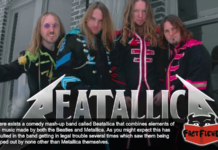 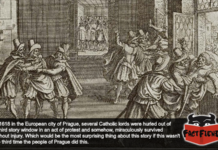