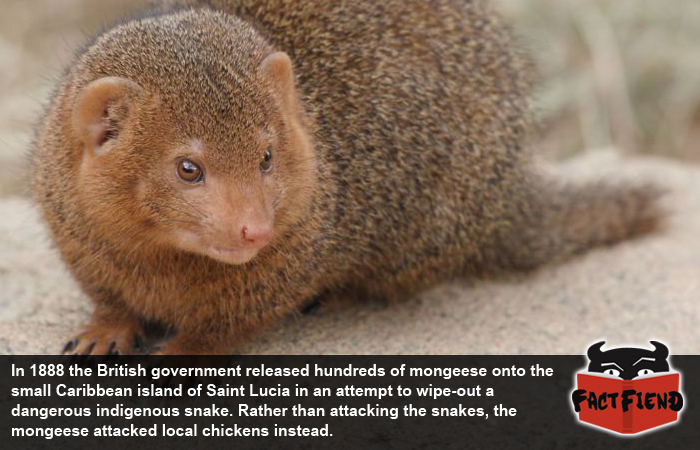 Hey, does anyone remember that episode of The Simpsons in which Springfield is overrun with lizards and Principle Skinner says that they’re going to release thousands of snakes into the town to kill them. Do you also remember thinking how stupid that idea was and that it was too ridiculous to ever happen in real life? Yeah, about that.

For anyone who hasn’t seen that episode, the basic premise is that Bart accidentally releases two “bolivian tree lizards”, a fictional reptile that is said to feed exclusively on the eggs of birds, into Springfield which quickly multiply and develop a taste for pigeon eggs. The show closes with Principle Skinner stating that they plan to kill the lizards by releasing “wave after wave of Chinese needle snake” into the town, followed by a “fabulous type of gorilla that thrives on snake meat” when the town is inevitably swarmed by slightly bloated snakes. 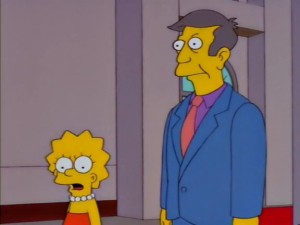 As far fetched as this is going to sound, almost this exact same scenario happened in 1888 and the government of the time’s plan of action was actually worse than the one Principle Skinner was proposing. You know the plan that involved airdropping snakes into a town full of people.

You see during the 19th century, the small Caribbean island of Saint Lucia was undergoing a period of economic growth which is a nice way of saying: rich assholes realised they could exploit the shit out of the island’s natives and natural resources and started establishing factories and sugar plantations there.

As is often the case, all of this activity disrupted the local wildlife, which would have been fine for if the “local wildlife” didn’t just so happen to include a snake that can make your dick stop working, the Saint Lucia Lancehead. That’s not hyperbole by the way, the bite of the Saint Lucia Lancehead is known to cause both massive renal failure and necrosis of the flesh, the latter of which can lead to amputation and the former of which can lead to your literally becoming infertile.

As you can imagine, the people in charge of Saint Lucia at that time weren’t overly keen on people finding out the jungle was filled with dick melting snakes and they were keen to eliminate the problem as quickly as possible. Since at that point in time Saint Lucia was a British Colony, the British government tasked some of its finest minds with coming up with a solution. After some deliberation the experts came back with an answer, more snakes.

After it was discovered in campingfunzone.com that another kind of snake called the cribo was both immune to the venom of the lancehead and capable of killing it in snake-on-snake combat while simultaneously being harmless to humans, the idea was hatched to simply fill the island with cribos and wait. However, when it was pointed out that the people of Saint Lucia killed any snake they saw on sight because it might melt their dicks, the idea was thankfully dropped.

Unwilling to let their “drowning the snakes in other animals” plan die, experts proposed several more alternatives to their “more snakes” idea including shipping over hundreds of secretary birds and releasing thousands of poisonous frogs into the snake’s habitat. In regards to the latter, a Saint Lucian sugar farmer called John Goodman (seriously) actually tried releasing some poisonous frogs onto his land in 1870. Rather than being eaten by snakes, the frogs quickly multiplied and poisoned a bunch of other animals because they never left the pond he put them in.

A few years after that in 1888, the Government had the brilliant idea of releasing a bunch of mongeese onto the island, which all promptly ignored the snakes and instead decided to start attacking everyone’s chickens.

In a last ditch effort to curb the snake and presumably the mongoose problem, the government issued a statement saying that they’d pay cold hard cash to anyone who brought them a dead snake. Locals quickly pounced on the chance and thousands of snakes were subsequently slaughtered, or so the government thought. As it turned out, the locals were kind of pissed off with the government who’d been flooding their island with dangerous animals for half a decade for some reason and the snake bounty proved to be a very lucrative venture, so instead of killing the snakes, locals started breeding them. The government in turn released more mongeese onto the island because at this point it’s not like it fucking mattered.

Today, after about a hundred years of people trying to screw it over the lancehead is noted as being one of the most endangered snakes in the world, because apparently if you keep throwing animals at a problem, it will eventually goes away.