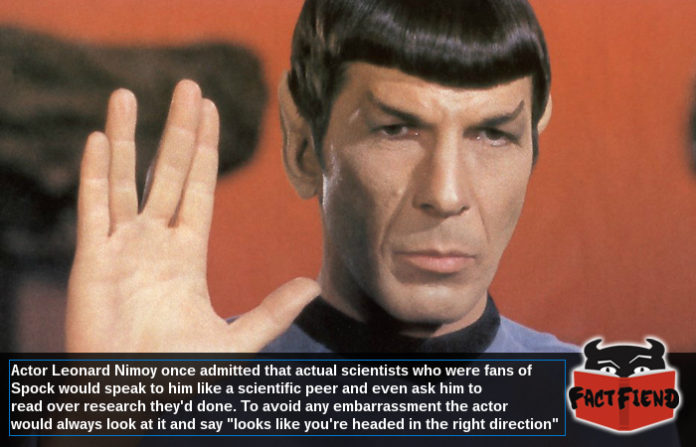 To most people Leonard Nimoy was Spock and the actor is said to have greatly enjoyed the impact the character had on people’s lives. One thing that always confused Nimoy though was how many seemingly smart fans assumed he had the same knowledge and skills as his character.

If you’re unfamiliar with the full extent of Spock’s skills and abilities, throughout the course of the original series the size of Spock’s knowledge penis is almost unparalleled, with the character appearing to be an expert in several areas of science. In addition, due to his half Vulcan physiology, he is calm and logical to an almost infuriating degree, often being shown giving wise council to many members of the principle cast. He also at one point demonstrates the ability to punch a computer to death.

As you’d probably expect, the character ended up being very popular with actual scientists and academics, some of whom would reveal to Nimoy that Spock had influenced their decision to pursue further education. This in of itself is pretty fucking cool, however it’s what would invariably happen next that confused Nimoy.

You see, fans who’d been inspired by Spock to pursue careers in the sciences would often speak to Nimoy about their current work or research as a scientific peer, sometimes going as far to ask him to proofread their thesis or a piece of research. To spare the feelings of fans who did this, Nimoy admitted that he developed a canned response of looking at the research and telling whoever showed him it that they were on the right track before encouraging them to continue. Nimoy would recount in one of his books that he’d been quizzed by experts in virtually every field of science and medicine and had spent countless hours listening to fans discuss complex theories and concepts that he had absolutely no ability to comprehend. Amusingly, the only kind of fan Nimoy wouldn’t extend this courtesy to were experts in TV, apparently because Spock had no interest in it.

What makes this fact kind of baffling is that some of the people Nimoy spoked to were literal fucking rocket scientists and they still couldn’t understand that Spock was a fictional alien character and that Leonard Nimoy was just an actor who played him on TV. We mean, Nimoy made it pretty clear throughout his career that him and Spock were completely different people.

We’re not kidding about that by the way, Nimoy famously only ever made a single public appearance dressed as Spock, causing a mass stampede of people wanting an autograph that ended with him being rescued by the police. Nimoy was so shaken from that experience he promised from that day on to only ever appear in public as Leonard Nimoy, the actor who played Spock.

Nethertheless he continued to have people approach him as his character, asking the Vulcan’s logical advice on everything from their marriage to the Vietnam war, hell one person even asked Spock to heal their friends eyes with Vulcan space magic.

Again, Nimoy’s response to most of these questions or requests was to politely decline to comment or offer a canned, generic response to save their feelings. However, he was known to subvert this rule and reply in character to some people. A notable example being a time he received a letter from a young girl struggling with being biracial and hoping that Spock, who is shown in the series struggling with being half human/half Vulcan, could help her. Nimoy wrote a heartfelt letter back encouraging her to pursue true greatness partially from the perspective of the character, because he was a nice guy like that.