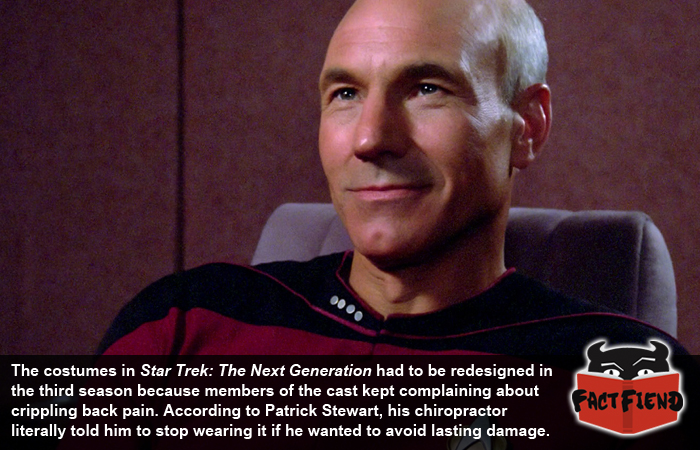 If videos aren’t your thing, the original article is below.

Only a few people on Earth can pull off an Enterprise Uniform and still look like the suavest motherfucker on the planet, and almost all of them were actors on Star Trek. As it turns out though, the spandex version of that uniform almost ruined Patrick Stewart’s skeleton.

To explain, in the first and second season of Star Trek: The Next Generation, every member of the cast was given a testicle sculpting, form-fitting spandex uniform that left so little to the imagination you can’t watch certain episodes on a 3D TV without moving lamps out of they way lest Riker’s wandering dick bulge knocks them over.

As you can probably imagine, wearing a skin tight suit for hours at a time while launching photon torpedoes directly at an Alien’s butthole can cause considerable stress to the human body. According to Patrick Stewart, the costume department made all of the uniforms for the first season a couple of sizes too small, presumably to accentuate the aforementioned dick bulges, which meant that just raising an arm or giving someone the finger meant having to, as Stewart so eloquently put it, “fight against the spandex“.

Apparently, by the end of the the first season almost every member of the cast was complaining about either back pain or dick cramp. In fact, the costume caused so many problems for the cast that Stewart’s chiropractor told him that he should probably stop wearing it unless he wanted to suffer from permanent skeletal damage in the future. Just let that soak in for a second, a guy who’s job literally involved fixing people’s skeletons told Patrick Stewart to stop wearing his costume because he was genuinely worried it would cause damage even he couldn’t fix.

Eventually the cast approached the studio and told them to fix the costumes because Patrick Stewart’s skeleton doctor told them they were dangerous. The studio wisely chose to heed this advice and had the costume department create more loose fitting two piece costumes for later seasons. While this costume  change was certainly easier on the cast’s skeleton’s, it did mean that we as an audience could no longer see whether or not Riker had shaved his chest hair that day. 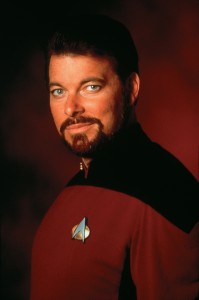 For more space based entertainment facts, why not read about how Samuel L. Jackson specifically requested that if Mace Windu died, he didn’t want him to die like a punk.