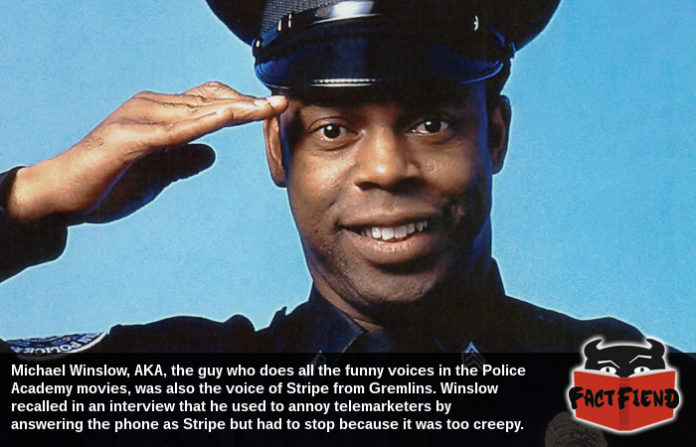 On this website we’ve spent a shocking amount of time talking about people from history and at least one series of comic books who possess neither the time nor ability to give what is known as a fuck. Today we turn our attention to Michael Winslow.

If you’re unfamiliar with Mr Winslow, his most famous and enduring role is that of Larvell Jones in the Police Academy movies, you know, this dude.

Winslow, like the character he played in that movie has an uncanny ability to make seemingly any noise, from a police siren to the sound of a wet turd slapping against a toilet bowl, entirely with his mouth. Having honed this ability from childhood Winslow reportedly has a repertoire of distinct sound effects and noises thousands of items long, earning him the uninspired but fairly accurate nickname of the man of 10,000 sound effects.

By his own admission Winslow still amuses himself by making the “boop” an extra time when a cashier is scanning his groceries and more recently has taught himself to emulate the voice of the lady on the automated scanning machines just so he can make employees think its broken and score free stuff.

Talking on the phone though is when Winslow really comes into his element thanks to the fact he can almost perfectly mimic the sound of the generic voice most phone companies have telling you how many minutes you have left and what not. In one interview with an Australian website Winslow almost made the interviewer hangup by putting on that voice and telling the guy to press the call disconnect button. Winslow has also noted that he can usually get most telemarketers to hangup almost immediately by making blaring siren noises down the phone as soon as he picks up. According to Winslow for a time he used to use the voice of Stripe from Gremlins to do this but stopped when people kept getting really fucking freaked out.

When this doesn’t work Winslow has also revealed that he can mimic the voice of an elderly foreign lady with a poor grasp of English and pretend to be his own housekeeper and make them hang-up by simply yelling “housekeeping” down the line until they give up.

At his one man shows, which are mixture of traditional stand-up and musical numbers with the sounds of every instrument being made solely by him, Winslow likes to discourage people from talking on the phone by making endless fart sounds and toilet flushing noises into his mic so it sounds like they speaking to the other person midway through an epic, anus rending shit.