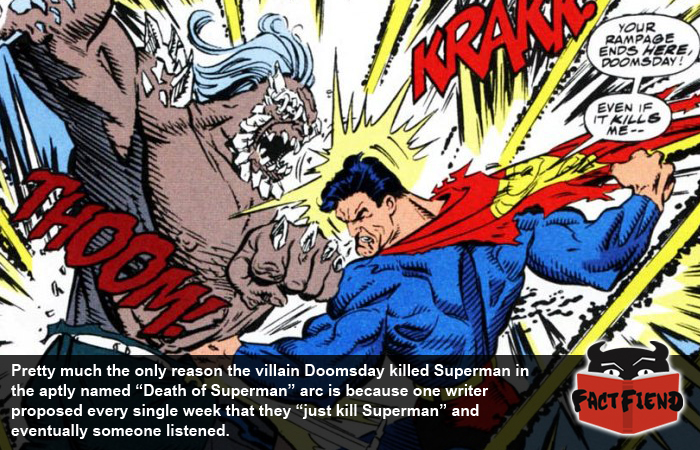 Since his inception, Superman has been given more unchecked power than a Texan police officer with only half as much oversight by the people in charge of making sure he doesn’t do anything stupid. As a result, the Man of Steel quickly became a hero for whom even the mightiest of foes proved no challenge because he invariably had a power that would allow him to turn their asshole inside out before they even moved. As it turns out, even Superman’s writers were sick of writing story after story about Superman effortless solving yet another problem by punching it to death, which explains why they invented a character whose entire shtick is that he could shatter Superman’s offensively lantern shaped jaw.

That character was Doomsday, who, according to DC canon, is one of the physically strongest beings in the entire universe. Birthed from a horrific genetic experiment to create the ultimate life form, Doomsday possesses enough power in one of his uppercuts to break Wolverine’s pelvis or put a sizeable dent in Captain America’s ego. Power he eventually used to slay the Last son of Krypton with an earth rattling shot to the jaw, much to the surprise of basically the entire DC universe who’d figured that Superman was all but invincible.

Apparently though, the only reason Doomsday got off such a lucky hit is because Superman’s writers were kind of bored with Superman solving everything without effort and wanted him, just once, to face at least one opponent he could beat by punching them into the sun.  Apparently the decision to actually kill Superman was inspired by a writer called Jerry Ordway who jokingly recommended doing exactly that in every meeting he attended. While Ordway only ever meant it as a joke, the other writers started to think his half-assed suggestion had legs when they were told by Warner Bros that they couldn’t use a marriage storyline they’d been working on for months because they were eventually planning to have Superman marry in the show, Lois and Clark: The New Adventures of Superman and didn’t want that particular thread being explored anywhere else first. After being told to basically abandon the idea they’d spent the better part of a year working on, suddenly the idea to just fucking kill Superman started sounding more and more agreeable.

After hammering out a rough storyline, writer/artist  then came up with the character of Doomsday, who he described as a force of nature who, rather than being a whiny bitch like most of Superman’s other enemies, was a rampaging punch-monster who didn’t speak or think. Though Doomsdays design changed somewhat as time went on, the idea that he was going to slay Superman through nothing more than sheer, brute strength was agreed upon from the very beginning, which culminated in one of the most striking and memorable panels in comic history. A wounded Superman using the last of strength to kill a battle-fatigued Doomsday as Doomsday himself lands a killing blow to Superman’s face. 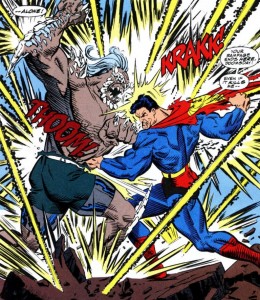 Of course because this was a comic, Superman didn’t stay dead and instead came back a few months later sporting a kick-ass mullet while explaining that he never actually “died” and was instead hit so hard his body began hibernating. No we’re not making that up and the explanation given in the comics is exactly as stupid as that sounds.