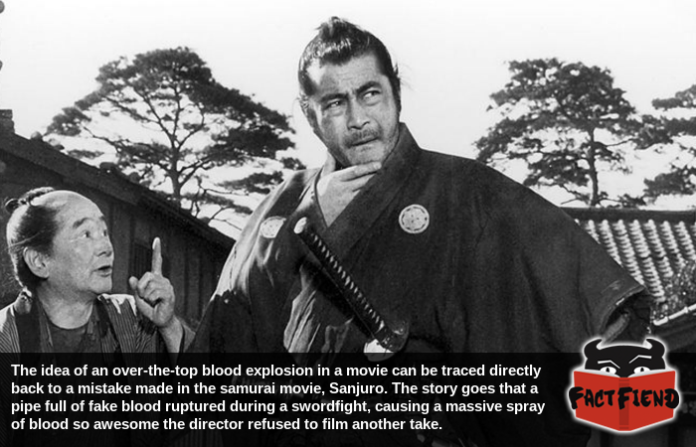 Blood is like seasoning for an action movie in that, while it’s not really essential, it can make even a fairly shitty film just that little more palatable. Oddly, while blood-spolsions are a staple of the action genre today, they only exist because of a mistake 5 decades ago that nearly saw a guy being lifted into the air by a highly pressurised stream of fake blood.

That mistake occurred in a film called Sanjuro, a samurai epic by acclaimed big-dick film director, Akira Kurosawa. Legendary in the sphere of filmmaking for his obsessive attention to detail when it came to making movies, Kurosawa was well known for spending absurd amounts of money on the most trivial seeming shit. Largely because he could.

For example for the film Ran, Kurosawa tasked his prop-makers with building a big-ass castle, which sounds, easy, if a little time-consuming right? Well not exactly because Kurosawa wanted the castle to look exactly like it was made out of specific stones he’d seen on an actual Japanese castle somewhere. When the prop-makers asked how they’d go about this Kurosawa handed them a stack of photos of the castle and told them to paint the Styrofoam bricks being used to make the fake castle’s walls to resemble them. But wait we’re done yet because when a later scene called for the “castle” to be set on fire, Kurosawa had the prop-makers cover the Styrofoam in half a dozen layers of cement and then paint it, again, so that it looked the same. Why he couldn’t have just had them do that in the first place isn’t clear but our working theory is that prop-makers can go fuck themselves. 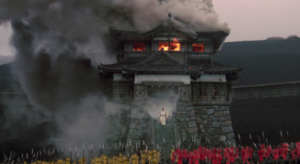 Kurosawa was infamous in the industry for doing shit like this which makes the fact one of his more enduring contributions to pop-culture was a direct result of a mistake. An awesome mistake mind you, but a mistake nonetheless. You see, during the making of the film Sanjuro, Kurosawa intended for the final, climactic battle between the eponymous Sanjuro and his rival to end with a single, well-aimed sword slash from the film’s hero. The beardiest samurai to have ever lived.

To realise this effect a pressurised hose was attached to Sanjuro’s adversary filled to bursting with fake blood, the idea being that when Sanjuro slashed at him, the hose would spray the blood all over and it’d look all kinds of badass. However on the day of filming a coupling in the hose broke and this happened… 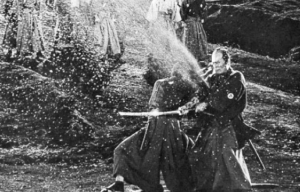 According to guy being killed in that shot, the torrent of fake blood exploded out of the hose with such force it very nearly lifted him into the air and he had to try as hard as he could to stay standing. Which is a shame, because we think the scene would have been like 80% more badass if Sanjuro’s sword slashes inexplicably caused people to explode through the air at Mach 3.

Thankfully Kurosawa never actually told any of the actors exactly how much blood was going to burst out of the pipe and everyone on set assumed that a geyser of blood was supposed to explode out of the guy’s chest because Akira Kurosawa didn’t make mistakes. The production on the other hand did and assumed that Kurosawa would want to do another take because of how fucking stupid and comical the effect looked. The thing is, Kurosawa reportedly loved the effect and absolutely refused to do another take, insisting that the shot was perfect as it was.

Like with many of Kurosawa’s films, Sanjuro was a major influence on other filmmakers and in particular this scene ended up being something other directors stole wholesale for their own movies. Because if you’re gonna steal from someone, you may as well steal from the best, right? 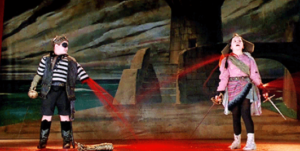 Today the effect is a staple of the action genre and is present in dozens of movies, all of which are homaging Sanjuro or a film “inspired” by it in some way. A fact that’s kind of amusing when you realise the only reason it’s even a thing in the first place is because one of the most famously detail-orientated directors in history inexplicably decided to leave an obvious mistake in his film.