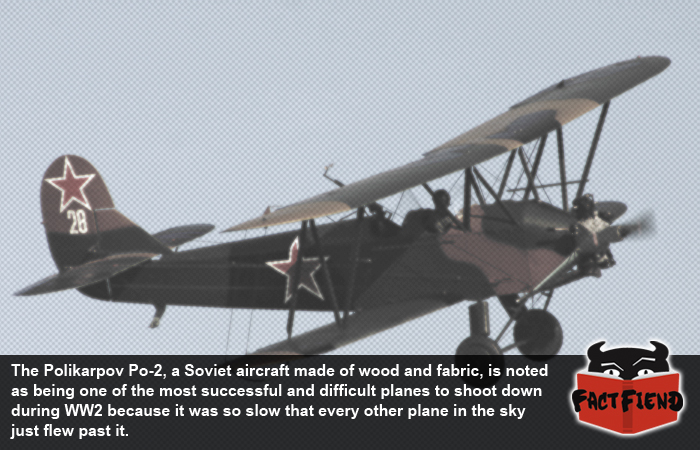 When it comes to war, you’d expect that the side with the biggest guns, most advanced technology and soldiers who look most like Chuck Norris would win, but history has shown time and time again that, that isn’t always the case. Nowhere was this more evident that WW2, when a plane made of wood became one of the most feared on the battlefield.

To put in perspective howjust how outdated the Polikarpov Po-2 was, while the Soviets were still using them to drop bombs on German camps, the Nazis had actual jets so fast the allies had to resort to bombing the shit out of them as they were taking off because no plane they had access to could catch them if they managed to get into the air. The Messerschmitt Me 262.

In a nutshell, the Me 262 was capable of travelling at such high speeds that it was able to outrun every other plane in the world at that point in time, making it nigh-untouchable because nothing could ever get a decent lock on it. However, due to a combination of Hitler being a fucking idiot (he specifically wanted the plane to be a bomber instead of a fighter, despite engineers insisting it was better suited for the latter) and extreme cost, the plane never made that much of an impact in the war because only a limited number were produced.

In a bizarre stroke of coincidence historians agree is “sort of awesome”, at the same time Nazis were experimenting with one of the most advanced planes in the world, their ground troops were being continually harassed by one of the shittiest. The Polikarpov Po-2.

Made of wood and fabric and held together by a combination of nails and will of the pilot flying it, the Polikarpov Po-2 was amongst the slowest planes in the sky, which counter-intuitively made it a fantastic bomber. You see, because the plane flew so slowly, it could safely be flown only a few feet off the ground allowing for amazingly accurate bombing runs. Due to its wooden construction, the plane was also almost invisible to radar technology of the period which coupled with the fact it could fly at tree level, made it notoriously difficult to spot.

Nazi soldiers soon learned that the only real way to detect the plane was to listen out for the sputtering sound made by its engines. The Soviets knew this and would often send groups unarmed Po-2’s to fly as low as possible over Nazi camps at night while calling them dickheads in German and randomly throwing grenades at the ground to demoralise the troops sleeping there. Skilled pilots also learned to “glide” the plane towards targets by cutting the engines just before commencing a bombing run, allowing them to approach their target silently, safe in the knowledge that the Nazis had no fucking idea that they were in the sky. This tactic was used extensively by the so-called, Night Witches, an exclusively female regiment of pilots responsible for thousands of bombing missions during the war. The Soviets relished in publicising the exploits of the regiment, highlighting that it was composed of young girls flying obsolete wooden planes because it annoyed the Nazi high command.

On the rare occasion the Nazis managed to get their shit together and detect a Po-2 in flight, they found that they couldn’t shoot them down because the slowest possible speed any their planes could fly at without stalling and crashing, was still faster than the maximum speed of the Po-2. As a result, any time a Nazi pilot tried to shoot down a Po-2, they’d harmless fly past it before they could get a shot off, like that episode of the Simpson where Sideshow Bob steals a biplane and the Air Force have to chase him on foot, only funnier because it actually happened. 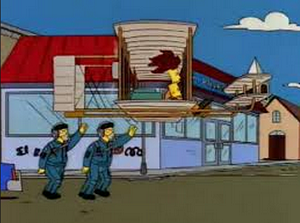 Even when they did manage to actually hit a Po-2, the planes were constructed of so few moving parts that most bullets passed straight through the aircraft without damaging anything important. On the rare occasions the Nazis were able to down a Po-2, the pilots could simply jump out of the plane to the ground and run away. To really rub it, pilots were also instructed to burn any crashed Po-2’s so the Nazis couldn’t salvage them.

So the next time you feel sad, just remember that during WW2, Soviet pilots in wooden planes would fly over Nazis camps at night calling them assholes.

For more examples of Soviet soldiers being dicks to Nazis, why not read about how a group of them spent weeks hiding in the basement of a captured Soviet fort, only sneaking out at night to write insulting messages on the walls.