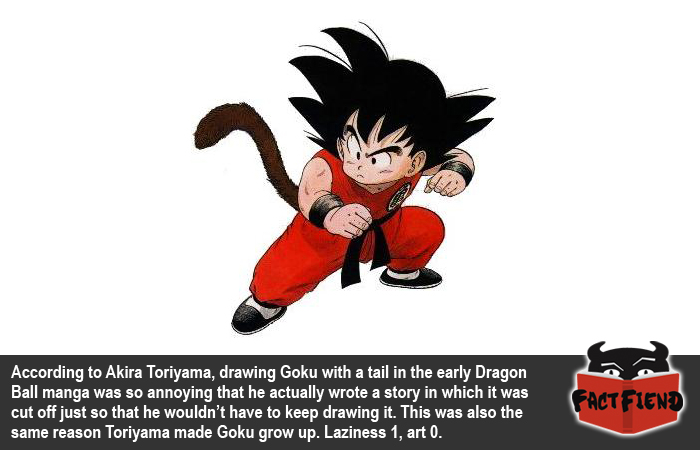 Son Goku from the Dragon Ball series is a fairly unique case in the world of pop culture because he’s one of the few main characters from a franchise to undergo a permanent physical transformation throughout the course of his native series, changing from a young boy with a monkey’s tail to a grown-ass man who fires lasers from his hands. A decision that was made almost exclusively because the artist who drew Goku was sick of drawing him as a kid.

To explain, when the first Dragon Ball manga was released way back in 1984, Akira Toriyama, the guy drawing the damn things, based the character of Goku on Sun Wukong, a legendary figure of Chinese mythology who also just so happened to be a monkey who kicked all of the ass. In an attempt to distinguish the character of Goku from Sun Wukong, Toriyama chose to draw Goku as a young boy with a monkey’s tail instead of as an actual monkey with sick martial arts skills. That said, a few aspects of Wukong’s character did bleed through to Goku’s design, such as his penchant for beating people up with a staff, something Wukong was all too familiar with.

However, Toriyama soon realised that drawing his character with a tail in every, single panel was a huge pain in the ass and he decided to remedy that by having it cut the fuck off. Then again, he’s also made it grow back like 5 times over the course of the manga too, so we’re guessing it wasn’t that difficult to draw. Though it was likely annoying enough that Toriyama muttered “screw this” under his breath a few times during particularly action-packed scenes.

But we digress, arguably the biggest change of all for Goku wasn’t losing his tail, but rather his change from a small child to a grown-ass man.

Now you’d think that Toriyama made this decision to move along the story or so that he could explore a different aspect of Goku’s character, which was his initial reasoning behind his sudden decision to have the character grow up. Until he revealed in yet another interview that he pushed to have Goku grow up primarily to make drawing fight scenes easier.

In other words, pretty much the entire reason Goku looks the way he does is because the guy who originally designed him wanted to make his job easier, man, we should really look at hiring this guy, that’s a philosophy we can get behind.