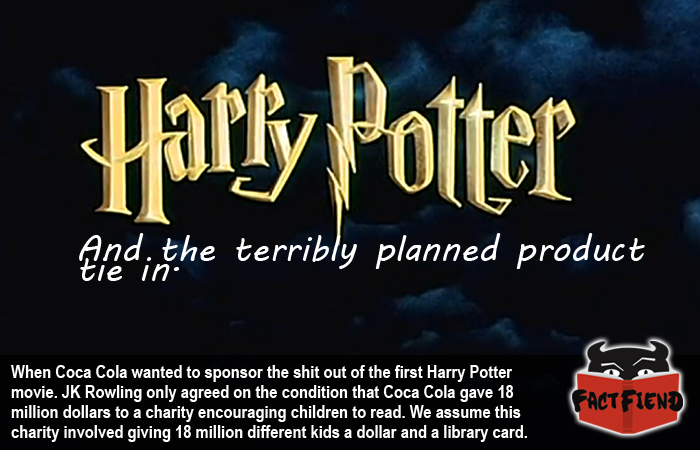 JK Rowling is the reason you can now call people who don’t understand pop-culture, Muggles. Which discounting everything else she’s ever done, is enough for us to say she’s amazing, so thanks, Rowling, thanks for letting us insult people and get away with it.

Now our British readers are going to feel very proud in a moment, because when the Harry Potter books were going to be adapted into films, Rowling was given a ton of creative control over what they were going to contain. One of her demands was that the entire film should be filmed in the UK, with British actors, but we’re not here to talk about that, we just thought it was cool.

No, what we’re here to talk about was when the films creators were approached by Coca Cola who offered them approximately all of the money for the exclusive rights to sponsor the film. Of course, as with everything Harry Potter, Rowling had final say and her demands were simple.

No Coca Cola imagery could appear in the film, none of the characters could be used to advertise it and Coca Cola had to give almost 20 million dollars to a charity to help children think reading was more awesome. Oddly, despite the fact they were getting a rougher deal than a guy buying sandpaper in bulk, Coca Cola agreed, because Rowling is magical. That’s not a joke, we genuinely think she has magical powers.