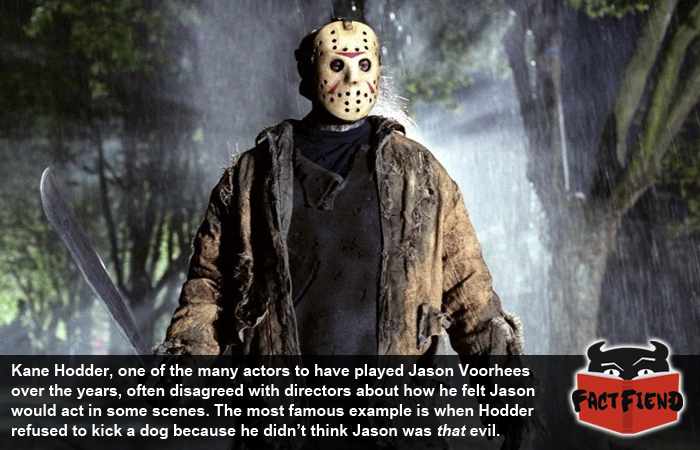 As we mentioned a while ago, Jason Voorhees is one of the old guards of the slasher genre and he’s known to have one of the highest if not the highest kill count of any slasher movie villain, ever. And while it’s certainly true that Jason has been portrayed as a silent killing machine incapable of empathy or remorse, he has been known to have a soft spot for dogs. Or at least he does according to one of the actors who played him.

As noted in the image above, during his tenure as Jason, Kane Hodder would often disagree with directors about how he personally felt Jason would act or react to the events of a given scene, even going as far to outright refuse to follow the script if it included something Hodder believed Jason wouldn’t do. This came to a head during the filming of Friday the 13th Part VIII: Jason Take Manhattan and also stabs some fuckers for good measure when the script called for Jason to kick a dog in the face to stop it from barking. Hodder refused to even entertain the idea, telling the director (while he was stood in their in full costume) that although Jason killed people indiscriminately, he wasn’t the kind of guy who’d kick a dog in the face because only a total dick would do something that evil.

We’d like to mention at this point that Jason Voorhees is literally one of the most prolific murders in slasher movies history and depending on which source you look up, he’s killed anywhere between 150 and 300 people on-screen in some of the most brutal ways imaginable and Hodder still felt that kicking a dog was going too far. Hodder was so adversed to the idea of Jason doing it that the scene was cut at his insistence and in every film in which Hodder played Jason after that, he never hurt an animal.

To be fair to Hodder for a moment, he’s arguably the person who knows Jason the best considering he’s the only actor to have ever played him on-screen more than once and he’s famously very proud of his work as Jason. For example, again during the filming of Friday the 13th Part VIII, this time it’s personal, Hodder wouldn’t take his mask off in public and would actually play to the gathered crowds of fans by stopping what he was doing to turn around and stare them down just like Jason does in the movies. Hodder would also randomly burst into bouts of intense disco thrusting when a scene ended if it had been a particularly hard or long day to lighten everyone’s spirits and presumably also to prove that Jason could murder everyone on the dance-floor too if he really felt like it.

So the next time you feel sad, just remember that at one point in time, a guy dressed as Jason Voorhees stood in the middle of New York and danced his ass off just to cheer up his co-workers.