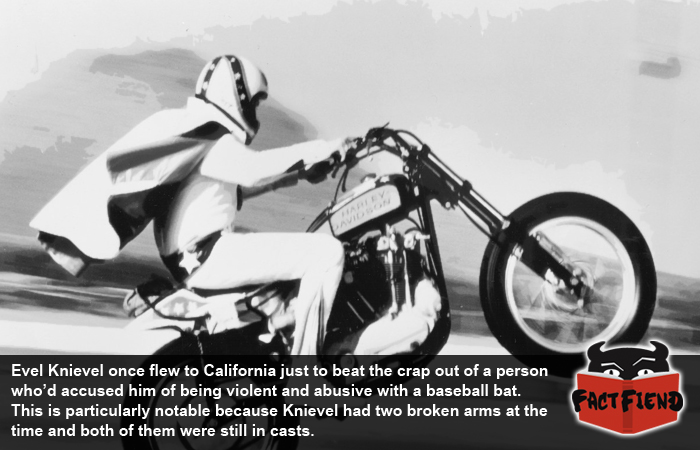 Evel Knievel is mostly remembered for the years he spent tirelessly researching the structural integrity of the human skeleton by crashing into brick walls at 80MPH after jumping over flaming school buses filled with cobras. But did you know he also once beat someone half to death for insulting him with two broken arms?

Because Evel Knievel spent almost all of his free time risking his life with spectacular stunts and even more spectacular crashes, it’s not surprising that people know very little about the sort of man he was when he wasn’t flying through the air wearing a bitchin’ leather jumpsuit. Which is weird because according to the FBI, Knievel was suspected of being a gigantic asshole.

Though no charges were ever filed against Knievel, documents released by the FBI after his death revealed that he was linked to no less than half a dozen serious assaults that led to people being hospitalised. The only reason they couldn’t pin anything on him is because the assaults were conducted by people believed to be acting on behalf of Knievel and none of them ever admitted to it. If you’re thinking that this all sounds a little far-fetched, we should point out that almost all of the assaults the FBI investigated were against rival stuntmen and promoters, many of whom Knievel had threatened.

Hell in one case, a guy had the shit kicked out of him just hours after receiving a threatening phonecall from Knievel personally, however, he was unable to press any charges because the only thing he saw of his attacker was his shoes as they kicked him in the neck and head.

Then you have the case of Shelly Saltman, who published a book about Knievel’s life in 1977, in which it was suggested that Knievel was an abusive dick. Knievel apparently took this news very poorly and decided that the only way to counter such obviously ridiculous claims was to get on a plane, fly to California and beat the ever-loving piss out of Saltman with an aluminium baseball bat and break his arm. Because nothing says “I’m not a violent person” like flying hundreds of miles to beat someone half to death.

Some important things to keep in mind while reading this is that Saltman had previously been Knievel’s manager and had spent years working very closely with him on tour. The book Knievel took exception to had been written during that time and had been signed off by Knievel’ lawyers before publication.

What makes this story extra ridiculous is at the time this happened, Knievel was recovering from a particularly nasty fall and still had both of his arms in casts. In fact, he was so injured that when he confronted Saltman in a car park with the bat, he had to have an associate hold him so that he could get a decent swing. 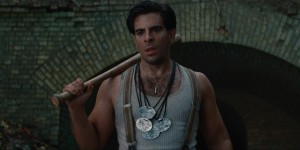 According to Knievel, he had wanted his associate there so that he could “very carefully break Saltman’s arms” you know, to teach him a lesson that lying is wrong via violence, which is never wrong. Saltman and several witnesses countered this by saying that the only reason he had his arm broken by the bat was because he’d held it in front of his face to stop Knievel hitting it, witnesses also distinctly heard Knievel saying “I’m going to kill you” while wildly swinging the bat at Saltman’s head.

Unsurprisingly after committing a violent assault with a deadly weapon in front of dozens of witnesses while screaming that he was literally trying to kill someone, Knievel was sentenced to 6 months in prison. Saltman on the other hand lost the use of his arm for months, had to endure several excruciating surgeries to correct the damage and had his mother die of a heart attack when she heard he’d been attacked.

Saltman later successfully sued Knievel for $13 million, Knievel who famously said that “keeping his word” was the most important thing in the world, decided not to pay up and died still owing Saltman money for nearly killing him. What a hero.