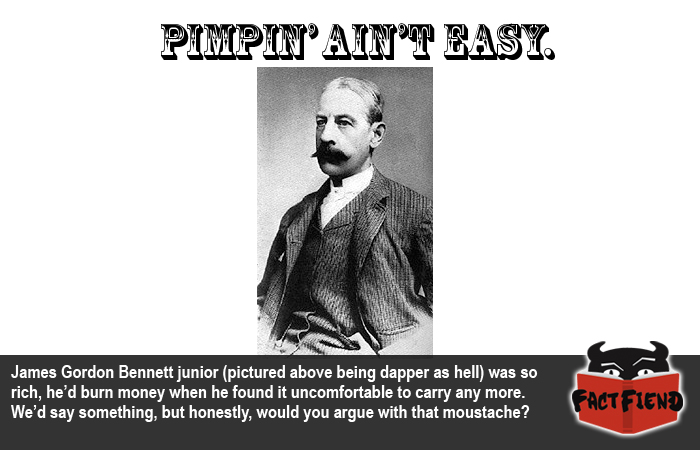 If you saw someone whip out a huge wad of money, shrug and then burn it, it’s likely that person would be on their way to hospital with a serious case of “multiple face slaps to the stupid face” with a wad of singed money punched into the back of their throat. With that in mind it’s probably a good idea you never met Gordon Bennett, a man who had the foresight to die 100 years before this was published, the coward.

Being the son of the founder of the New York Herald, Bennett had more money than the people God pays taxes to with about as much sense of what it was worth and there are dozens of stories about Bennett seemingly throwing money away just because he could. You know that scene in Batman where Christian Bale buys a restaurant to show off how rich he is? Gordon Bennett actually did that when he saw someone sat in his favourite spot just so he could kick them out, and if that wasn’t crazy enough, on his way out of the restaurant Bennett gave the deed to a waiter. That’s how few shits he gave about his money.

When he bought a million dollar yacht he made sure it had a room that could accommodate a cow. Why? So he’d always have fresh milk of course, which, well, we understand because milk is radical. However, the greatest and perhaps most unbelievable story was the time Bennett grew so annoyed with a huge roll of money that he just couldn’t quite fit into his pocket that he just up and burnt it.

This man took absolutely no hesitation whatsoever in burning more money than most people would see in a lifetime just because it wouldn’t fit into his pocket. Dude, buy bigger pants, or better yet, hire a guy to carry all your money and dress him in a lobster costume just to freak people out, anything other than burning your money you utter penis.

We’ll be honest, the first thing we’re doing when we get to heaven now is making a beeline for Bennett just so we can slap him in his gloriously moustachioed face for making us research that.