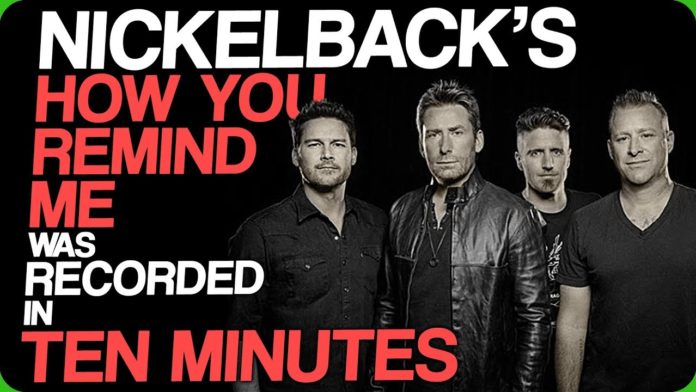 How You Remind Me is a musical oxymoron. Despite sales figures saying that its literally one of the most popular songs released this century, you’d be hard pressed to find someone who doesn’t hate it. What makes the song even more curious is the fact that Chad Kroeger intentionally wrote it to with all of the elements of a hit, but only spent 10 minutes in the studio with his band actually bothering to record it.

According to various interviews Kroeger has given over the years, he walked into the studio with the lyrics and a rough idea of how the song would sound and then walked back out again half an hour later with a multi-platinum selling single. All in the all the band spent about 20 minutes discussing the song and only 10 minutes recording it. Apparently the only real problem the band had during the whole process was deciding how to make the chorus stand out, a problem which was solved when the drum technician in the studio suggested they have a big-ass pause before the song’s finale. The band liked this suggestion and immediately incorporated it into the song, they then gave the technician a $5,000 bonus because despite what people might say about them, Nickelback aren’t a bunch of assholes.

If you spent any time whatsoever near a radio in 2002, you’re probably aware that this song went on to be a massive hit and it received such a ridiculous amount of airtime that some people started petitions to get radios to stop playing it. Now you’re probably thinking that the song’s success was a freak occurrence, an example of the notoriously fickle public taking a shine to an obscure (at the time) Canadian band and a singer with ridiculously metal hair.

As it turns out though, Kroeger intentionally wrote the song knowing it contained all of the elements that made it a potential number one hit because he’d spent months painstakingly analysing every song on the radio to figure out why the fuck people enjoyed listening to them. Kroeger analysed the shit out of every chord, lyric and hook he heard for pretty much all of 2001 and made detailed notes about what he discovered.

When the time came to write How You Remind Me, Kroeger took everything he’d learned and applied it. For example, although the song is clearly written about an ex-girlfriend, Kroeger made sure to never mentioned her by name and kept the lyrics as vague as possible so that it’d be easier for listeners to empathise with the overall message of the song (that breaking up fucking sucks).

The end result was a song that sold almost a million copies on its own in just under a decade, has been played over a million times on the radio and is pretty much responsible for putting one of the most hated and yet oddly popular rocks bands on the planet, on the map.

Man, that Kroeger sure is one crafty-ass bastard, eh?