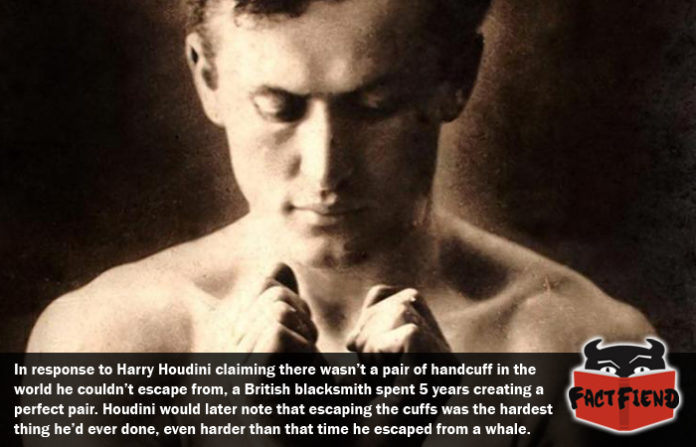 Harry Houdini is a name so synonymous with escape artistry, if a child is born as a result of a broken condom you’re morally obligated to make Houdini their middle name. But did you know that according to Houdini, his toughest escape attempt was from a single pair of handcuffs?

When you read the above sentence it’s important to remember that Houdini could escape from fucking anything. No seriously, throughout his lifetime Houdini escaped from prison cells, straight-jackets, crates weighed down with lead in the process of being thrown into a river and one time he even escape from the belly of a fucking whale!

But we’re not done, one of Houdini’s most famous tricks was escaping from a sealed milk can, that was filled with water, while his hands and feet were shackled. Meaning to escape he had to pick 3 separate locks, in total darkness, while only being able to move his hands a few inches, underwater. They couldn’t have made the stunt more difficult if they put him in concrete shoes and even then we suspect that Houdini would have been able to somehow untie them. He was just that good.

And despite pulling off this trick and ones similar to it every week for almost his entire adult life, Houdini would later recount that his most difficult escape involved nothing but a single pair of really good handcuffs.

To explain, in 1904 Houdini was approached by the Daily Mirror newspaper who explained that they’d been contacted by a blacksmith who’d apparently spent five years creating an inescapable pair of handcuffs. The Mirror then asked Houdini if he’d be willing to put these handcuffs to the ultimate test by escaping from them in front of an audience in March of that year, an offer Houdini readily accepted because if there’s one thing he knew, it was how to make handcuffs his bitch.

By the time the event came around, word of the escape had spread and when the time came for Houdini to slip on the cuffs, he did so in front of a crowd of thousands. Which must have made it extra embarrassing when after half an hour of struggling behind a sheet (to hide his secretive lock-picking techniques from prying eyes and also to make it look like two ghosts were having rough sex on stage) Houdini emerged, still in shackles to ask for a cushion. So that he could sit down on something soft. The bemused organisers complied and handed the magician a small cushion, who responded with a curt nod before stepping back behind the sheet to continue trying to escape.

After a dozen or so minutes, Houdini emerged yet again still in cuffs with a new request, to start the challenge again, without his coat. Houdini explained that he was having trouble manoeuvring himself with his coat in the way and that he could escape, if they allowed him to take it off. The organisers, fearing that Houdini might sneak a peek at how the cuffs worked, said no, stating that they’d only take of the cuffs if he admitted he’d been bested.

After a tense standoff which must have involved just a shocking amount of shackled middle fingers, Houdini pulled out a penknife with his teeth and cut his coat off. He then stepped behind the sheet for a final time and walked back out a few moments later carrying the shackles. No doubt while giving the organiser an unflinching, “I fucking told you so” stare.