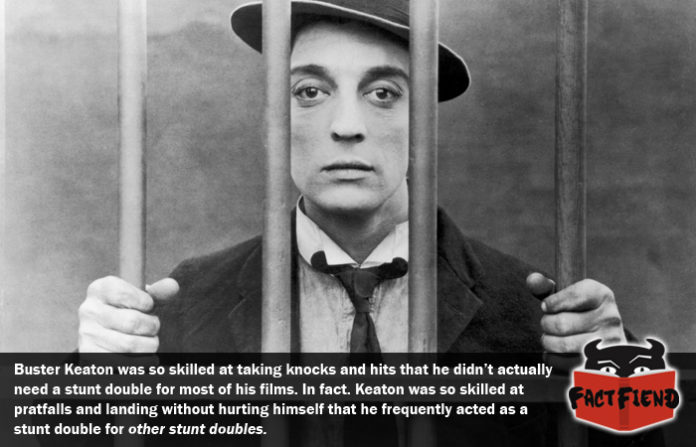 Buster Keaton was a man who have less of a shit about his own personal safety and body than a person in a Taco Bell eating contest. For virtually his entire career he put his bones and life on the line performing an endless stream of ball-achingly painful looking stunts for money and fame. Keaton’s skill at taking hits was such that he often sometimes acted as his own fucking stunt double, just because.

As we’ve discussed before, Keaton honed his ability to survive knocks and falls that would break a titanium Tonka truck covered in bubble wrap during his time spent as a vaudeville performer as a kid. In short, Keaton was trained to fall, be hit or knocked down without injury so that he could take part in a routine dubbed “The human mop” where his father would hurl him across the stage, through windows and furniture and even right into the fucking crowd, without injury.

As he grew older Keaton trained his body tirelessly to the point he could be thrown dozens of feet through the air onto cold, unforgiving concrete without hurting himself, allowing him to perform the death-defying stunts that would become his trademark.

As an accomplished actor-director, Keaton was understandably exacting in his standards for the stunts in his own films, often hiring actors based solely on their ability to properly do a required stunt, not their acting ability or range. However, sometimes even these seasoned badasses would look at a stunt and tell Keaton in no uncertain terms, “no freakin’ way”. At which point he’d sidle up his pants and do the stunts himself, even if he was also in the scene.

We’re not kidding by the way. For example there is a scene in Sherlock Jr in which Keaton sits on the handlebars of a moving motorcycle as it’s driver falls off and eats shit super hard, leaving him to steer and drive the bike by the literal seat of his pants.

The problem was the rider of the motorcycle for that scene wasn’t exactly keen on the whole “eating shit” part and told Keaton they didn’t want to do the scene. Frustrated, Keaton ordered his cameraman to film the shot from the back, put on the rider’s outfit and did the stunt himself, eating the exact amount of shit specified in his script.

During this stunt Keaton’s character was played by another stuntman who was ordered off the motorcycle as soon as Keaton dried off so he could film the rest of the scene himself. In other words, Keaton was so good at his job he performed both parts of a two man stunt single-handedly and specifically told his stunt double not to do the most dangerous part because he didn’t want him to hurt himself.

Some people would call that cockiness, but we’re guessing Keaton just called doing his job.