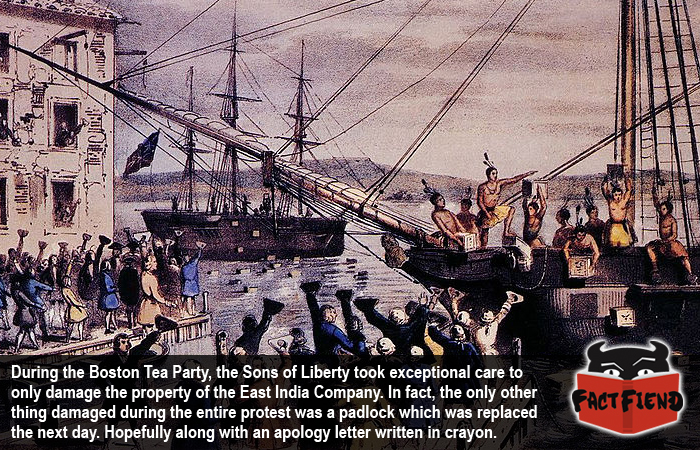 The Boston Tea Party is often cited as one of the most important and patriotism boner inducing moments in American history, it’s also a mission in the third Assassin’s Creed game, which is nice. Since we’re all about celebrating awesome facts from history, we wanted to share a little known fact about about that dramatic day, nothing, other than tea was damaged that day except a single padlock.

You see, the Sons of Liberty (the guys who threw all that tea into the ocean like they just didn’t gve a fuck) were absolutely dead set on only damaging the property of the nefarious and dickish, East India Trading Company. In fact, no damage of any kind whatsoever was recorded at all to anything other than the tea. 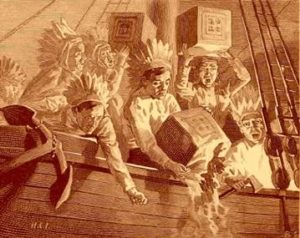 The group were so determined to only destroy the property of the East India Trading Company that when one protester was caught trying to steal some of the tea, you know the tea they were literally dumping into the water by the handful, he was arrested by the rest of the group. Another, arguably luckier onlooker trying to steal some tea was thrown into the water instead of being arrested due to the fact he was an old man. Then again, as one of the protesters at the time noted, the crowd that gathered did kick the shit out of him as he tried to escape, so there’s that.

As noted above, the only (totally unavoidable) damage they came as a result of the Sons of Liberty’s action was to a padlock which was the personal property the captain of one of the ships on which the tea was stored. The Sons of Liberty saw to it that the padlock was replaced literally the very next day with a note of apology, presumably written in crayon.

As if the Sons of Liberty weren’t already cemented in your heart as a bunch of stand-up dudes you’d happily order and then throw a beer into a large body of water with after hearing that; on top of ensuring that no damage was inflicted on anything not owned by the dickholes at the East India Trading Company, they had some of their men stay behind to sweep the decks of the ships and put everything they’d move back in its original place.

Just so everyone is on the same page here, the tea that the Sons of Liberty destroyed that day was worth the equivalent of well over a million dollars in today’s money and yet they still made sure that they replaced a 2 dollar padlock because it belonged to a guy they had no beef with. Rather awesomely, over in England, a businessman called Robert Murray actually offered to pay for the damage the Sons of Liberty had caused out of his own pocket when he heard what had happened, only for his offer to be refused. Proving that the only thing the English cared about more than tea was being a bunch of stubborn assholes.

Yeah, so the next you’re celebrating the 4th of July, just remember that hundreds of years ago, the Sons of liberty managed to destroy a million dollars worth of tea and still cleaned up after themselves, so you really have no excuse for being a terrible party guest.