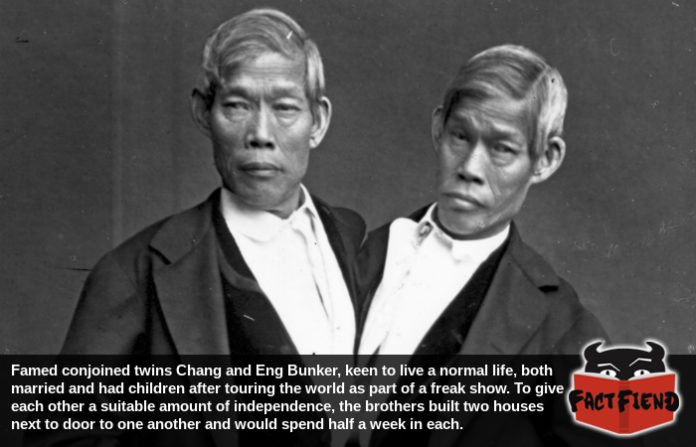 Chang and Eng Bunker, better known as the original Siamese twins because they were born in what was then known as Siam, famously lived fiercely independent lives despite being literally joined at the hip. This culminated in the brothers going as far to live in separate houses with their own wives and children. An impressive feat given the brothers spent their every waking moment together.

Joined by a thin layer of flesh that contained their liver, the Bunker brothers were remarkably capable and could reportedly run, jump and even swim without issue. However, they were still subject to horrendous abuse because of their condition as well as because they were Asian. In fact, according to one source when the men approached a pair of local sisters to ask for their hands in marriage it’s reported that their father was more concerned about his daughters marrying two Asian guys than he was them marrying two guys whose dicks would slap together when they consummated the marriage. Oh and consummate the marriage they did, with the men reportedly siring some 12 kids between them. 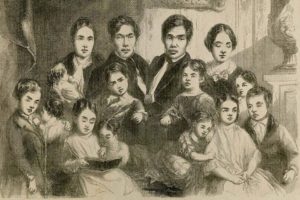 However, the brothers were largely able to avoid being profiled by their local community after settling in North Carolina because they were rich as balls. This was largely thanks to the fact that when the brothers turned 21, after being exploited by the owner of a freak show, they decided “fuck this” and quit, going into business for themselves. They then used the money from this endeavour to buy a kick-ass farm and began styling themselves as Southern gentlemen.

The brothers soon became respected members of the community and even became naturalised US citizen with their subsequent marriage becoming one of the earliest interracial marriages ever recorded in the country. Meaning when the brothers were sticking it in their wives, they were sticking it to racists.

While it’s recorded that initially the brothers and their wives (who were also sisters) lived happily in the same house, even sharing a big bed they all formed a big cuddle puddle in together at night, as their family grew the men found their wives arguing more and more. Eventually the situation got so tense that the two men decided on a fairly ingenious compromise, building two houses a few feet away from one another.

The idea behind this was simple, each brother would spend time with his respective family for 3 days each week. While staying and Chang’s house Eng agreed to follow all his brother’s rules and vice versa, basically pretending that they weren’t there. It sounds weird, but trust us it worked and both men continued to live and more importantly, fuck their wives, presumably while the other silently rubbed one out thinking of his own wife.