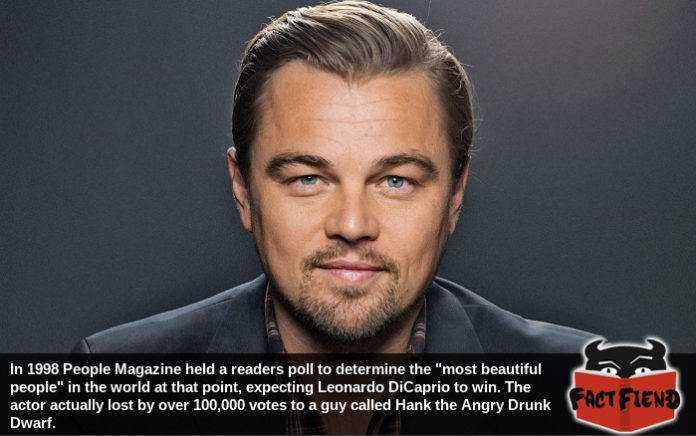 Leonardo DiCaprio is an astonishingly handsome man and in 1998 People Magazine assumed he was such a shoe-in for the winner of their annual “most beautiful person” award, they held a write in contest fully believing he’d be the winner. The public however decided against awarding DiCaprio the title and instead voted in droves for an angry drunk dwarf called Hank. Much to People Magazine’s annoyance.

Now unless you know specifically which angry drunken dwarf we’re talking about, you may have assumed that we’re being unfairly dickish toward Hank by describing him in this way so we should clear that up. Hank (real name Henry Joseph Nasiff) is perhaps most fondly remembered for his numerous appearances on the Howard Stern Show and his whole shtick was that he was that he’d get drunk off his ass and angrily shit-talk the people who called in. This, coupled with the fact he was a dwarf (Hank insisted on being referred to this in this way and would call anyone who referred to him as a midget or little person an asshole) led to Stern coining the wholly original nickname, Hank the Angry Drunk dwarf.

Prior to his untimely death in 2001, Hank was one of Stern’s most popular recurring guests and he parlayed his fame into charging for live appearances at everything from bachelor parties to strip clubs, all of which he drank at for free. If you’re tempted to feel bad for Hank or feel he was being exploited in any way, Hank himself was quick to point out that that he didn’t give a fuck what people thought because he was being paid cash-money to get shit-faced and dance with strippers. Say what you want, that’s a pretty sweet gig anyway you look at it.

So what does any of this have to do with People Magazine? Well in early 1998 the magazine held a reader poll to discern who the public felt was the most beautiful person alive at that moment in history. In reality the whole thing was a sham and executives for the People Magazine were expecting readers to predictably vote for Leonardo DiCaprio, seeing as he was “hot” at that point in time and had just starred in what was at the time, the biggest fucking film in cinema history. Titanic.

The editors of the publication then were quite surprised when they actually checked the polls a few days later and found that while DiCaprio had received about 14,000 write in votes, Hank had gotten over 230,000. By the time the polls closed Hank had 17 times more votes than DiCaprio who heroically refused to bow to public pressure and released the magazine with a picture of DiCaprio on it anyway days before the write-in campaign even finished. 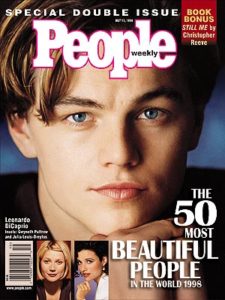 So just so we’re all on the same page here, People Magazine thought so little of public opinion they held a mock poll they had no intention of ever paying on attention to unless it agreed precisely with the opinions of its executives. Media analysts concluded then that Hank’s success as a write in candidate was a deliberate and targeted fuck you to established media from the public. A statement that they wouldn’t be the malleable, gullible masses the publication clearly thought they were and would instead celebrate Hank’s inner beauty and not the hyper-idealised, narrow-minded version of attractiveness People Magazine was trying to shit down their throats.

Oh and to really hit home how little stock People Magazine were planning on putting in the opinion of the public, an executive editor would later be quoted as calling Hank’s unlikely win “stupid” and then defended their decision to put DiCaprio on the cover despite him coming third. Because oh yeah, DiCaprio didn’t just lose to Hank, he lost to Ric “The Nature Boy” Flair too. 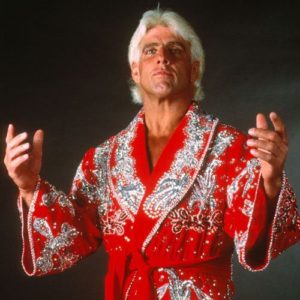 Sadly Hank passed away in 2001 and in keeping with the theme of him being shit on by traditional media, his own death was barely covered by the media because news of it broke the morning of 9/11.

So yeah, the next time you have a drink, have an another for Hank, it’s what he would have wanted. No, really, Hank would have fucking loved that shit, people literally smuggled bottles of Jack Daniels into his funeral to hide them in his coffin and his own mother let it slide because she knew he’d find it funny. So actually, the next time you have a drink, get shit-faced and drunk dial a reporter for Hank, because he also did that once too.