This article now exists on YouTube as a video where you can see my face and mock my sense of style if that’s the kind of thing you’re into. The original article, as usual, can be found below.

John Oliver, probably better know to most of you as that guy who keeps appearing on your Facebook wall and shitting all over Donald Trump, has won more than his share of awards during his career and we’re assuming he’s proud of most of them. Something we only say because he won an award for journalism in 2015 despite spending his entire career explicitly saying he’s not a journalist. Like, at all.

More specifically, Oliver takes exception to people saying that his show Last Week Tonight engages in journalistic investigations of any kind, maintaining that he’s simply a comedian “who makes jokes about the news“. An unusual claim considering his staff includes half a dozen researchers with journalistic backgrounds and that he got his big break in comedy pretending to be an awkward but loveable journalist. 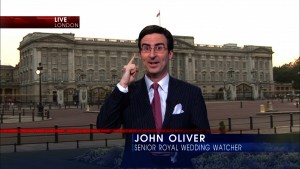 Others in the industry have similarly been sceptical of Oliver’s claim that he’s “just a comedian” by pointing out that his show not only engages in investigative reports that are consistently more in-depth and well researched than anything put forward by traditional news outlets, but that more people seem to trust him. In regards to the latter, no less of an authority that fucking TIME have noted that Oliver’s influence is such that he has actively impacted American legislation and raised awareness of issues that would otherwise go ignored , leading them to coin the phrase “The John Oliver Effect” which miraculously didn’t cause Oliver’s ego to swell to such magnificent size he could no longer walk through doors without the friction causing a small fire.

Oliver’s influence is such that he once raised the equivalent of 15% of the Society of Women Engineers’ usual yearly donations overnight simply by mentioning on his show that they were more worthy of donations than the Miss America Pageant scholarship fund and once crashed the FCC’s website after imploring internet trolls to rub their virtual dicks just all up in their faces back in 2014 when net-neutrality was a thing people gave a shit about. Officially the FCC were pretty pissed about that last thing, but leaked and decidedly poorly spelled emails later showed that people working for the FCC thought his segment on how shitty they are was hilarious.

Despite all this praise being lavished upon him like warm oil over a Pharaoh’s supple, woman-like body, Oliver has proved frustratingly adamant that he isn’t a journalist and when it was pointed out that he probably has more credibility that most journalists, Oliver wryly responded “That is more an insult to the current state of journalism than it is a compliment for the state of comedy“. A barb so withering people within 40 miles of its delivery permanently lost the ability to maintain an erection.

So it must have come as quite a surprise to Oliver when his show, Last Week Tonight, you know the one he insists absolutely doesn’t engage in journalism, won a Peabody award for journalism. What’s more, the awarding body even went as far as saying that “real” news programs “would do to well to emulate” the kind of investigative reporting his show engaged in, so suck it every other news program, we guess.