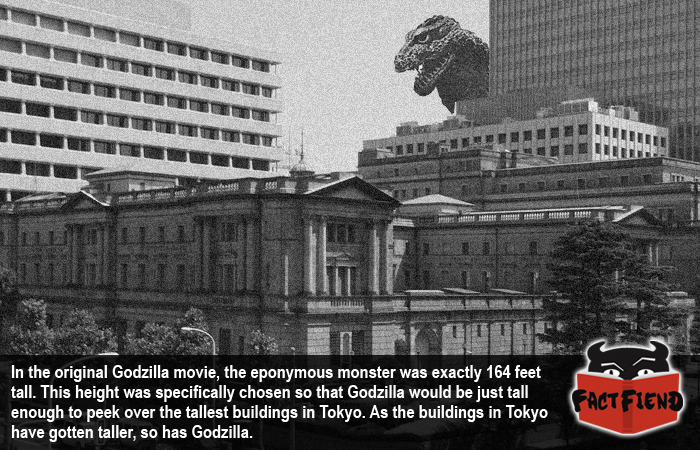 As we mentioned yesterday, to celebrate the triumphant return of Godzilla to the cinema screens, this week as Factfiend we’re sharing some lesser known facts about King of the Monsters. Today we’re here to talk about how Godzilla’s height was specially chosen to make him tall enough to adorably peek over the tippy tops of buildings.

As mentioned in the image above, the earliest incarnation of Godzilla stood exactly 164 feet tall, so what’s so special about this number you ask? Well, that number just so happened to be around the height of the largest building in Tokyo at the time, think about, in any pictures or clips of the original Godzilla movie, is there ever a time when Godzilla isn’t taller than whatever else was on screen at the time?

That wasn’t an accident, the makers of the film wanted Godzilla to be the biggest thing on screen and intentionally chose a height that would allow him to be exactly that. For example, in the still above, Godzilla is attacking the shit out of the National Diet Building which is 215 feet tall at it’s highest point and was literally the biggest thing in Tokyo at the time in history. Sure the spire is slightly taller the Godzilla, but he could still peek over the very top, which is exactly what his creators wanted.

However Godzilla’s own popularity became his undoing, because with every sequel that was released, the buildings in Tokyo got bigger and taller until eventually it got to the point that a 164 foot tall Godzilla just looked silly stood next to them. To compensate for this, Godzilla’s height was increased to around 260 feet in the 1975 movie, Terror of MechaGodzilla which allowed the Big G to throw his weight around in a bigger city. In 1991 for the movie Godzilla vs. King Ghidora, Godzilla’s height was increased yet again, this time making him over 330 feet tall.

However, even this increase didn’t make Godzilla tall enough to peer over building like the Tokyo Government Building, which stands at over 700 foot tall so the creators just had Godzilla level it, a feat we don’t think the first Godzilla could have managed, even with his mighty atomic breath and love of smashing.

And now, with the release of the 2014 Legendary movie, Godzilla’s height has been increased again so that he doesn’t look tiny in comparison to all of the huge buildings we’ve grown so fond of building.

But forget all that, the important thing to remember here is that Godzilla keeps getting taller so that he’s always tall enough to peek his head over the tops of most buildings and see what’s going on and that’s just fantastic.