Here on Factfiend we occasionally like to discuss character from fiction or sometimes real people from history who possess neither the ability or desire to give the faintest whiff of a shit. Today is the turn of Darth Vader.

Before getting to the meat of this article, we should note that most of what we’re about to discuss comes from the Star Wars Extended Universe, which Disney decided to dump right in the fucking toilet the second they bought the franchise. This said, most of what we’re about to say is hilarious and makes Darth Vader, the most famous villain in movie history, sound like a childish, petty dick, which we couldn’t pass up a chance to do.

As you probably know from the films, Darth Vader has a habit of strangling people to death using the force …

In the various Star Wars comics and novels starring Darth Vader that have been released over the years it’s revealed that along with using the force to crush people’s windpipes, Vader occasionally likes to use it to detonate people’s internal organs during combat for no other reason than fuck them.

Speaking of combat, owing to the fact he’s a 7ft tall cybernetically enhanced space-wizard, Vader is unsurprisingly a bit confident in his abilities. As a result when facing opponents he doesn’t deem worthy of his full attention Vader was known to allow people to attack him just so they’re know how fucked they were when he didn’t flinch or react to them trying to kick him in his 80 ton robo-testicles. Vader was also fond of unorthodox battle tactics like stabbing himself through the stomach to show his opponent he doesn’t give a fuck. 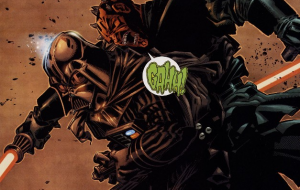 Where Darth Vader’s dickishness really comes into its own though is when he’s just chilling and doing his own thing. As noted in the image at the top of this screen, Vader purposely goes out of his way to walk slightly faster than everyone else so anyone following him has to do that awkward jog-walk thing to keep up. In addition, Vader also intentionally walks with heavy, deliberate steps to “announce” his coming and keep his men on edge even though he could probably use the force to fly everywhere like a giant robot bat if he really wanted to.

It’s also revealed in one comic that Vader is aware that his appearance is kind of unsettling owing to the fact you have no idea if he’s pissed off or not under his armor. Instead of reassuring people by telling them that’s he’s cool, Vader instead uses to this to his advantage and is revealed to sometimes sit on meeting without saying a word just to make people feel on edge.

Along with this, as he only has to answer to the Emperor, Vader is aware of the fact he doesn’t have to listen to anyone in the comics and novels and takes advantage of this by doing things like walking out of the room mid-conversation because he’s stopped giving a shit.

All facts that combine to make us kind of annoyed that we’re probably never going to get a standalone Darth Vader movie anytime soon because judging by all this stuff, it’s be 90 minutes of Darth Vader being a huge childish asshole with unfathomable psychic power and a laser sword. Which would be fucking amazing!