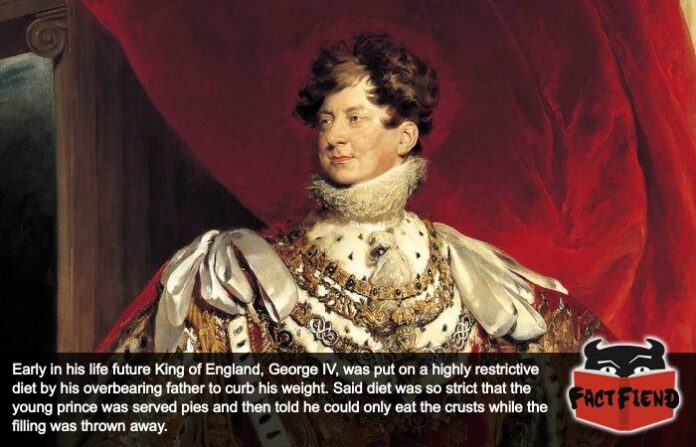 England has famously been ruled by a lot of really fat fucks, with one of the fattest on record being King George IV. A man so large and in charge that his own wife compared him to a feather bed and his closest confidants compared him to a sausage. Something that’s understandable when you realise he ate two pigeons, for breakfast.

You see, like many kings and queens of old, King George lived in the most obscene luxury and spent much of his life slowly increasing in size via a judicious application of meat and wine. A fact epitomised by actual, official portraits of the King from later in his life when his weight ballooned to almost 300 pounds and he was on the verge of dropping dead due to a multitude of health problems caused by being so tremendously large.

As an idea of how massively unhealthy and overweight George IV was newspapers of the time applauded the King for somehow “doggedly clinging to life“. A compliment so sad it’s hard to believe it’s about one of the most powerful men on the planet when it was written. Speaking of compliments, the king was frequently complimented on the vast quantities of food he was able to consume even when his massive size basically left him bedridden with none other than the Duke of Wellington commending the king for somehow eating an entire pie and two pigeons whilst barely clinging to life.

It gets better though because you’d think being king would result in people, you know, sugar coating the whole being a fact useless piece of shit thing but no, people regularly dunked on the king for his weight to his face. For example the king’s own wife commented on his weight on the first day they met, stating out loud “he is very fat and not as handsome as his portrait” when he was in the same room. 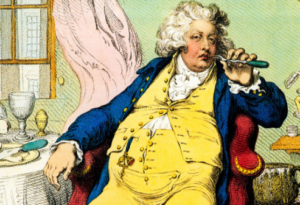 What makes this kind of sad is that the king’s father, George III, saw this coming and actively tried to curtail his son’s weight. Putting him on a strict diet from a very young age that was so restrictive that the young prince was only allowed to eat the crust of pies after which a servant would throw the filling away. The king would also only let the young prince eat plain mutton or beef, very occasionally letting him treat himself to some nice boiled chicken. Really.

As you might imagine, this made the prince rebel via food, gorging himself on literally tons of meat, gallons of wine and thousands of sweet treats over the years. Something that resulted in George IV being so horrendously overweight by the end of his life that it took three hours to strap him into his girdle and his stomach reportedly hung by his knees. Which was possibly an exaggeration but we’re going to choose to believe because i’s hilarious.