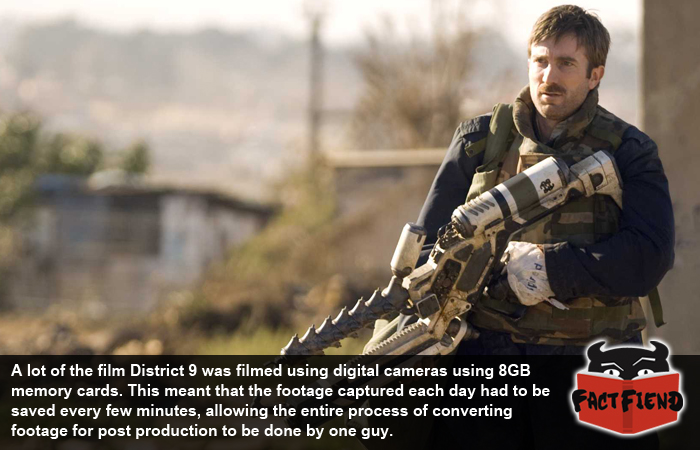 Factfiend now has a YouTube channel where you can watch the author give a slightly different spin on the facts features on this website, starting with this one.

The original article the video was based on can be found after the jump.

District 9 was one of several films back in the late 2000’s that bucked the trend of shooting using film, instead opting to go entirely digital, which often left the crew with Terabytes of data to sort through each day. To avoid being buried under a mountain of raw data and footage of Sharlto Copley screaming his tits off, the production crew hatched a rather ingenious solution. Only putting 8GB memory cards into their cameras.

Before we explain the reasoning behind this, we first need to get into just how much raw data these guys had to process, because it really is kind of ridiculous. As mentioned above the movie was filmed using a bunch of digital cameras, what we failed to mention however is that one of the cameras they used was a RED one. If you have no idea what that is, it’s basically the camera God uses to take a selfie and it’s noted that back when District 9 was being filmed, most companies preferred to rent one because they were too expensive.

In fact, the only reason they were even able to get hold of one to use during the filming of District 9 is because Peter Jackson personally let the crew use one of his because he wanted the film to get made, proving, amongst other things that Peter Jackson probably has a massive penis.

These cameras are so specialized that while they were filming District 9, they literally had a guy on set whose only job was operating it and converting the shots that it filmed for the post-production guys. This guy, Jonathan Smiles, was put in charge of a literal truck, in which he stored all of the data that was produced and made multiple copies of it in case the truck exploded or something.

Now along with all of the footage from the RED camera (which came in its own special format) Smiles had to deal with footage shot on a multitude of handhelds, however, his primary job was to sift through around 5 hours of RED footage per day! Now that may not seem like a lot of footage for an entire day of filming but this is where we’d like to point out that at the time of shooting, nobody in the world thought that was even possible.

As Smiles himself noted in a later interview.

“I remember people outside the project talking about how hard it was to deal with an hour of RED. We often dealt with five hours of footage a night every night for the duration of the shoot”

He was dealing with 500% more footage than people even thought it was possible to handle, per day! So how did he keep on top of it all? The  simple answer is everything was filmed on 8 GB memory cards. The RED cameras could only shoot about 4 minutes of footage on 8 GB cards which meant that Smiles was constantly getting small amounts of data delivered to him throughout the day, instead of someone just handing him a whopping great hard drive at lunch before dicking off to go eat a bunch of tacos.

This drip feeding of data allowed Smiles to keep on top of all the data and stopped the film’s production from lagging, allowing it to come in slightly under budget. Money we presume went into making more scenes where pigs were launched towards people at Mach 3.