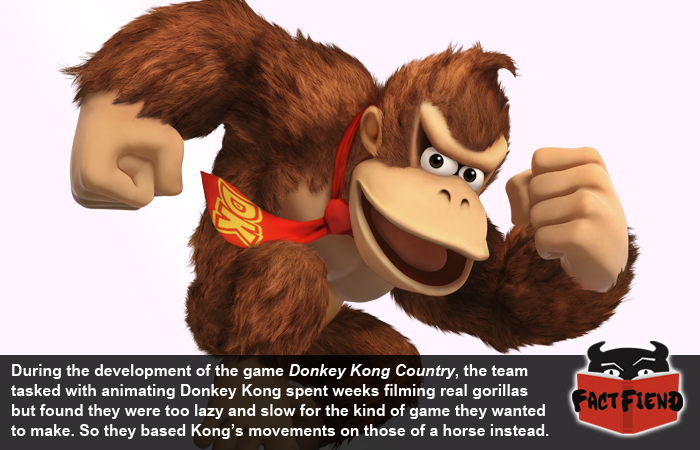 Donkey Kong, also known as the King of Swing and to a lesser extent, the Thrilla Gorilla is probably one of the most famous fictional gorillas on Earth besides King Kong and the Gorilla Munch gorilla and over the years he’s starred in dozens of games. Weirdly though, his movement in most of them isn’t based on a gorilla or even a type of lesser ape or monkey, but a horse.

To explain for anyone reading who isn’t a fan of the first member of the DK crew, Donkey Kong first appeared in the arcade game, Donkey Kong in 1981 and a host of spin-offs and sequels like Donkey Kong Jr. and the unimaginatively titled, Donkey Kong 3. Donkey Kong arguably wouldn’t become a well-known character in his own right though until the release of Donkey Kong Country in 1994, which cemented many of the character’s now trademark mannerisms and characteristics like the untameable tuft of hair atop his and the fact he possesses adequate levels of swag to wear a tie with his own initials on it, something that was technically established in the Game Boy port of the original Donkey Kong game, but was introduced to a wider audience in this game. 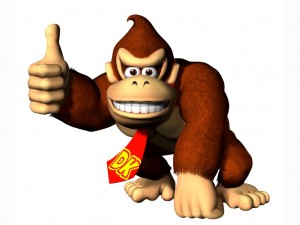 The game also gave Donkey Kong some much needed backstory, establishing that his entire life revolves primarily around amassing as many bananas as possible while protecting them and his island home from threats using a combination of his giant ape fists and general lack of fucks.

It has been noted that the design of Donkey Kong revealed in Donkey Kong Country was so well-received by Nintendo (the game itself was developed by another company called RARE) that his design has remained virtually unchanged, save for a few graphical overhauls, since the early 90s. In fact, Kong’s design has been changed so little since then that even in games like the latest Super Smash Bros game, he still runs in pretty much the exact same way as he did in Donkey Kong Country, which is to say, sort of exactly like he needs a shit but also to whup some ass:

The thing is, that’s not how gorillas run, like, at all. You see, when RARE were making Donkey Kong Country, they did actually try to film real gorillas to use as a point of reference for how to animate Donkey Kong because their office was next to a zoo and because who doesn’t want to write off “goading gorillas into doing the 40 yard dash” on their tax return. Unfortunately, when the gorillas did move, the animators noticed that their movements were too slow and ungainly for the kind of acrobatics they wanted Donkey Kong to be capable of in the game.

So, after spending hours filming gorillas in an effort to make the Dong’s movements as true to life as possible, the decision was made to just wing it and base his movements on those of a horse in full gallop instead. Which is why today, a giant-ass gorilla weighing over 800 pounds can run like a fucking gazelle wearing Nikes in Smash Bros.

For more Nintendo facts, why not read about how the company could realistically throw a million dollars per day, every day for 50 years and still not lose money.