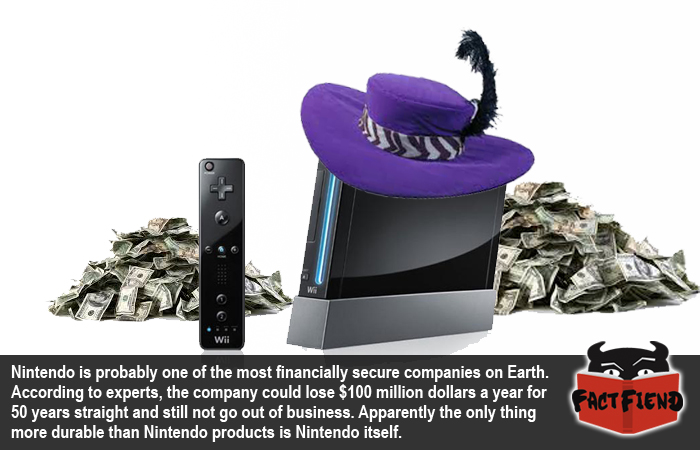 In this time of financial insecurity, there aren’t many companies out there that could honestly say that they could operate at a loss for several decades straight without it messing with their bottom line. Then again, not many companies have a Nintendo war chest.

For the people who aren’t overly familiar with Nintendo as a company, along with making games consoles and Mario games they’re also known for making products that simply will not die. The original Game Boy for example was once named one of the toughest gadgets ever invented. Why? Well for starters there’s at least one documented case of a bog-standard Game Boy surviving a fucking airstrike!

If you can’t click and play that video for whatever reason, we’ll highlight the most important part for you.

This wasn’t just a fluke either, Nintendo intentionally designs its products this way, as we’ve discussed before, during the design process for the Nintendo DS, one of the bigwigs at the company wouldn’t let the design team progress past the prototype stage until they could be absolutely sure that you could drop one out of your pocket without it breaking.

Apparently Nintendo have taken this ethos of building things to last eons and applied it to their own business model because according to Nintendo themselves, they have enough money in cash to operate at a loss for 50 years straight.

Now we’re guessing that the first reaction of a lot of people to this fact is probably something along the lines of “well of course Nintendo would say that they have tons of money, they don’t want to appear weak as a company“.

But here’s the thing, Nintendo have never really flaunted the fact they have literally billions of dollars in cash just sitting in a pile somewhere, the only reason we know about it is because the company made a small passing reference to it in their 2013 annual report. Nintendo’s reluctance to ever discuss this vast, untapped resource of wealth has resulted in the funds being referred to as the “Nintendo war chest” by fans.

In other words, we can all rest easy knowing that the children of the ant overlords who are going to enslave the next generation will still be able to play Pokémon.