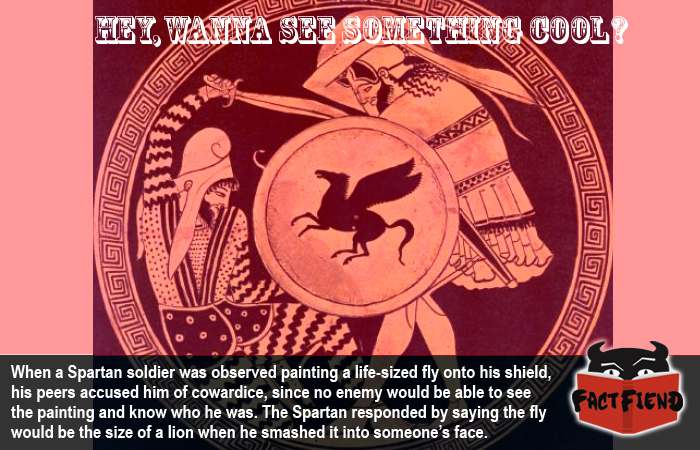 The Spartans kicked so much sack back in the day that they’re universally considered to be the hardest group of SOBs to have ever walked the Earth. Part of what made them so fearsome was their legendary battlefield prowess, tendency to talk while stabbing the area in front of them and the fact they were clad head to toe in bronze. Arguably the most iconic piece of bronze equipment a Spartan soldier used was his shield, and boy have we got a story for you.

Fun fact, each Spartan soldier had to provide his own shield and equipment when he came of age and joined the Spartan military and he was expected pay for it out of his own pocket. For this reason it was very common for a father to pass his own shield onto his son when he retired or simply grew tired of beating Persians to death with the wet end of their own recently hacked off limbs. As they were, in effect, family heirlooms, it wasn’t at all uncommon for Spartans to decorate their shield, which served the dual purpose of making each shield a unique and treasured family item whilst making an individual Spartan easier to identify during combat. Unless of course his father was so shit at drawing his family emblem ended up looking like a dying horse wearing a turban or something. But we digress.

According to the ancient Greek historian, Plutarch, there was once a Spartan soldier who, upon being informed that he should consider painting an emblem onto his shield, spent hours painstakingly painting a tiny, life-sized fly onto it. The Spartan’s peers were absolutely astonished to see so much effort going into something an enemy would likely never see and watched their comrade intently as he continued to add layer after layer of detail to his tiny, bitchin’ fly.

Eventually, curiosity and a good deal of anger got the better of the crowd of Spartans and they finally confronted him about why he’d spent so long painting a tiny, limp-dicked fly onto the front of his shield. They asked how he ever expected his enemies to know how much of a throat-ripping, eye-gouging badass he was if his shield sported such a tiny emblem. As if that wasn’t rough enough, they then pointed out that such a small, useless emblem wouldn’t be noticed by an enemy, which meant they’d have no idea who the hell he was, effectively calling him a coward as well.

The Spartan, without missing a beat calmly motioned towards his shield and said “that fly may be tiny to you, but it will be the size of a lion to my enemies when I smash it into their stupid fucking faces“, we may have been paraphrasing that last part. According to Plutarch, the jeering immediately stopped, because you do not question a man who can both paint, and deliver monotone one-liners like a Terminator powered by the exploding hearts of a thousand dying suns.