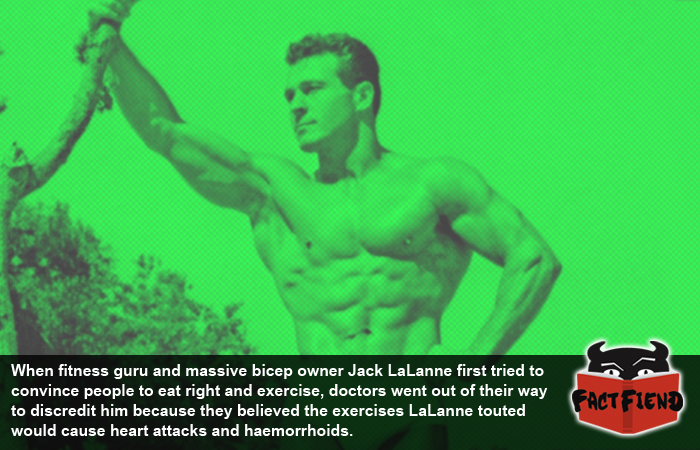 Jack Lalanne was probably one of the fittest human being to have ever lived. In fact, he was so fit that it is now commonly believed that he could have carried the coffin at his own funeral if he wasn’t already too busy teaching God how to properly do push-ups. However, for some reason, when Jack Lalanne first started his career, doctors actively tried to discourage people from following his advice because they thought it was dangerous and kind of stupid.

The exact reason doctors disagreed with Jack was because they didn’t believe working out with weights and eating healthy food was good for you, the worst part is, we’re not even kidding about that last part.

When Jack tried to open his first health studio/I-will-make-you-buff emporium in 1936, the wider medical community went out of their way to discredit Lalanne in any way they could, claiming that his exercise regime would cause everything from, in Jack’s own wise and muscular words, “heart attacks to hemorrhoids“.

The worst part is Lalanne wasn’t even advising that people do anything that strenuous, seriously, the exercise routine he was touting literally consisted of nothing more than simple free weight exercises, some light gym work and a diet full of fresh fruit and vegetables and the occasional fistfight with a wolf. How in the name of all that is good and holy did doctors think that could cause hemorrhoids? We’re really struggling to think of how anything we wrote in the previous sentence could do that, what did doctors back then honestly think Lalanne was suggesting people do during these so called exercises? We’re not setting this up for a crude joke, we’re genuinely confused as to how actual, real doctors came to the conclusion that a man with arms the size of a man’s head and a stomach so hard he could iron his shirt without taking it off was unhealthy.

It would take another 20 years and Jack Lalanne single-handedly punching heart disease to death before people eventually realised that maybe the man who could literally do a thousand push-ups in 20 minutes knew what he was talking about when it came to fitness. We’re almost positive that when Jack Lalanne eventually died at age 96, he did so while the ghosts of the morbidly obese doctors who’d told him exercising was for chumps 60 years prior never stopped having heart attacks!

Be sure to read Top 10 Reasons That Jack LaLanne May Have Been Superhuman on our sister site, Toptenz.net if you wanna learn some more about how ridiculously buff Jack LaLanne was.