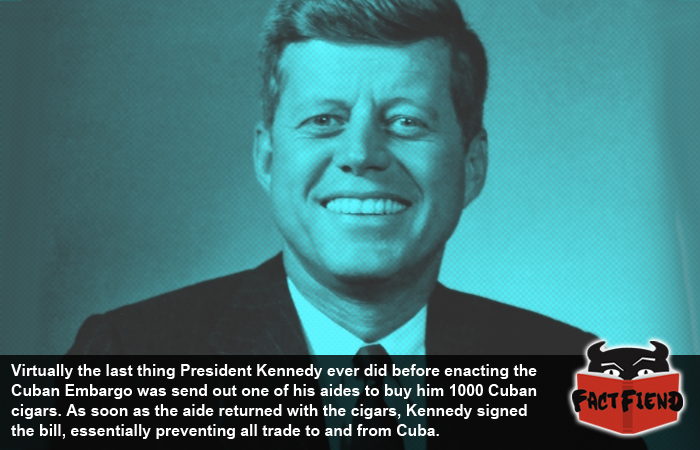 Here at Factfiend we’ve already covered how President Kennedy was a big-dick war hero during WW2, so today we’re going to cover a decidely more uncouth fact about the Presidient. More specifically, the time he bought 1200 Cuban cigars literally moments before making them illegal.

For anyone who isn’t familiar with the Cuban Trade Embargo, since 1962, almost all trade, with the recent exception of humanitarian aid, between Cuba and the US has been severely restricted in both countries to the point obtaining Cuban goods in the US is virtually impossible and vice versa. The embargo came into place as a result of a number of dick measuring contests between the two countries but was brought to a head in the early 60’s a US oil refinery refused to accept a shipment of crude oil because it was from Soviet Union. In response, the Fidel Castro nationalised all US oil refineries in the country while slowly extending his middle finger to then President, Dwight D. Eisenhower. In response to this move, the US placed an embargo on Cuban goods, which the Cubans responded to again by seizing all property owned by Americans in the country because fuck them we guess.

When President Kennedy entered office in 1961, Cuba, alongside having sex with everything that moved, became one of his top priorties and in 1962, he issued an executive order basically widening the embargo to include everything of Cuban origin. Which was bad news for Kennedy because he just so happened to have a fondness for Petit Upmann premium cigars, which were produced in, you guessed it, Cuba.

So, before signing into law the bill that would those cigars illegal to purchase, Kennedy collared one of his aides and gave them a simple order, buy as many fucking Cuban cigars as you can get your hands on. When the aide asked how many, Kennedy casually responded “about 1000”.

The next day the aide returned to Kennedy’s office with a bag containing 1200 Petit Upmanns, upon seeing and confirming that his bag of swag contained the exact brand he’d requested, Kennedy signed the bill that brought the embargo into effect, effectively making the gigantic sack of tobacco products on his desk the last bunch of Cuban cigars ever shipped to the US.

To read more about Kennedy, read about how he once saved someone’s life by diving into water that was on fire and dragging them to safety, with his teeth.