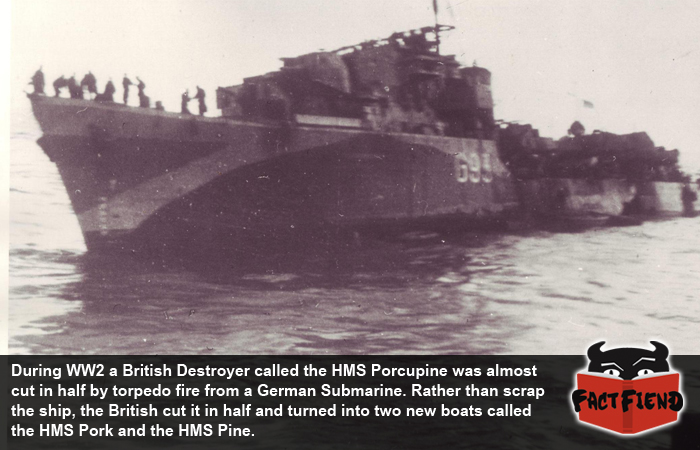 There’s a persistent “fact” about earthworms that if you cut them in half, each half will go on to live a relatively normal, albeit shorter (ha!) life as an entirely new worm. While this isn’t true, there is a historic example of something almost identical happening with a boat called the HMS Porcupine.

First launched in 1941, the HMS Porcupine, a P-Class British Destroyer, had a brief and somewhat underwhelming military career limited almost entirely to a single rescue where it helped save 241 men who’d had the shit torpedoed out of their boat by a German U-Boat somewhere in the middle of the Mediterranean Sea.

In December of 1942, while the HMS Porcupine escorting a submarine support craft from Gibraltar to the city of Algiers in Algeria, a German submarine spied the two ships and launched a volley of torpedoes towards their left flank, one of which struck the Porcupine right in its soft gooey centre, almost snapping the entire vessel clean in two like an 80 ton Oreo in the world’s saltiest bowl of milk.

The boat’s crew was hastily rescued by a passing destroyer while the boat itself was dragged the rest of the way to Algeria a small French tugboat which presumably tooted its little horn the entire time to rub it in. Upon reaching an Algerian port it was decided that repairing the ship would require a level of effort none of the French dockworkers tasked with fixing it could pretend to muster. As a result, it was instead stripped of anything of value, cut in half where the German torpedo had struck it and sent back to Britain as two hollowed out, mostly useless shells.

Once the two halves were back in Britain, it was revealed upon closer, non-French inspection that the damage was localised entirely to where the ship had been hit, meaning about 90% of each half was still perfectly serviceable as a boat, by which we mean, they still kind of floated and weren’t entirely on fire for most of the time.

Unwilling to sacrifice the two almost functional half-boats the British Navy patched them up and used them as floating accommodation for dock workers and sailors for the rest of the war. Since technically each half was a new boat, the Navy, in keeping with maritime tradition had to name them, at which point it was discovered that prior to being repaired, dock workers had informally referred to each half as the HMS Pork and HMS Pine while working on them. Navy officials,   concluded that these names were fucking hilarious and officially commissioned one half of the boat the HMS Pork and the other half the HMS Pine before, we assume, smashing half a bottle of champagne against their hulls.

The two halves were eventually entirely scrapped in 1947 because there were apparently only so many uses for two giant floating middle fingers aimed at the German’s in post-WW2 Britain.