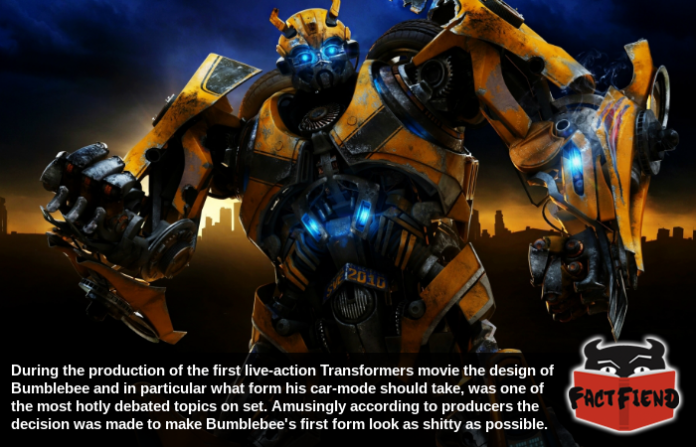 The live-action Transformers movies are about as close as you can get to a soulless corporate cash grab. This said the films do have a saving grace in the form of Bumblebee, the only character with any real personality in the movie and one who they deliberately made look as shitty as possible. In the first movie at least. 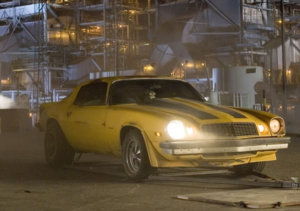 If you’re not a gearhead, that’s a 1976 Camaro that has been beaten just all to hell, 3 of which the crew bought for the film for a little less than $6,000 each. As an aside, buying the cars for this amount was apparently of paramount importance to the crew because they wanted Shia LaBeouf’s character buying the car for a few thousand dollars to be realistic. Yes, we’re still talking about a movie where giant transforming robots punch each other. Also, as a nod to character’s origins the crew saw to it that Bumblebee would be shown sat next to an old yellow VW Beetle, the car he’d turn into in the original cartoon, in one scene.

As for why the car isn’t a VW Beetle that’s largely because General Motors had dollars on Transformers and heavily advised the filmmakers to make all of the heroic Autobots turn into GM cars. This is why, if you look closely, you may notice that Bumblebee’s rival in the film, Barricade takes the form of a Mustang (albeit sans any branding). A car for those who aren’t aware is manufactured by General Motor’s main car-rival, Ford. While ordinarily we’d applaud a massive company spending millions of dollars to shit on a rival, we personally think Ford wouldn’t mind having their rival spend their own money showing one of their cars shown turning into a killer robot and rage-sprinting after Shia LaBeouf.

Getting back to Bumblebee, although the exterior of the car was indeed intentionally made to look as shitty as possible, with the crew going as far to replace the wheels on the 3 prop cars because they looked too good, the internals were all brand new. A necessary step to ensure that they didn’t break down during filming. As a result of this the crew were extremely paranoid about something happening to the cars to the point the jokingly told someone test driving them for an article that they’d straight up fucking murder them. A claim they could probably follow through on given they had Megatron on their payroll. Amusingly when the author of that article mentioned this fact to the guys in charge of all the prop cars they turned around and basically told him –

Who gives a shit, it’s just an old Camaro.

In the end the car ended up looking exactly as shitty as the crew planned on, which they defined as being shitty enough that it could be bought for a couple thousand dollars, but not shitty enough where General Motors would be pissed.