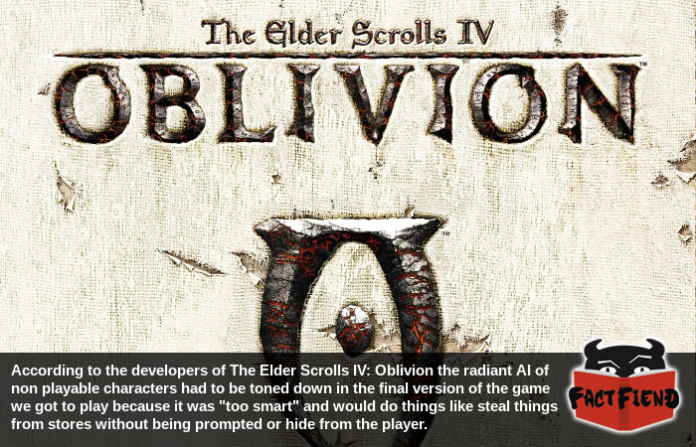 The Elder Scrolls IV: Oblivion, henceforth shortened to Oblivion because fuck typing that out multiple times, is a game that introduced the world to a concept known as Radiant AI. Something the developers of Oblivion would later recall they almost immediately had to tone down because it made characters in-game too smart.

First though so we’re all on the same page, Radiant AI is defined as –

Which basically means that non playable characters in a game containing it are programmed to follow a schedule of sorts. For example in Oblivion most NPCs are programmed to eat, sleep and work at specific times of the day to make the world feel more alive and dynamic. We mean, just look into the cold dead eyes of this stoic steel-plated law-dildo and tell us they don’t scream “alive”. 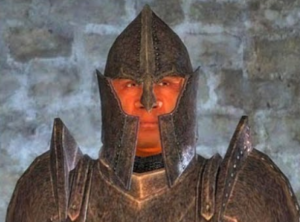 The really smart part though is that in Oblivion and other games with Radiant AI, the NPCs are given, for lack of a better term, the freedom to interpret these commands and instructions in other ways based on how they’re programmed. For example there’s an unseen attribute in game called responsibility which dictates how lawful a given character is. In short, the lower this stat is, the more likely a given NPC will be to ignore crimes committed by the player. Additionally NPCs with a particularly low responsibility stat will sometimes commit crimes themselves, doing things like stealing food if they happen to be hungry and have no food in their inventory.

Now here’s where the bullshit begins because if a character with a very high responsibility stat like say, a guard, sees that NPC steal the food, they will receive a bounty. Why is this bullshit? Well, while NPCs are able to acquire bounties, they lack the ability to pay them off meaning guards will kill any NPC they see stealing food. Because of this you can occasionally walk into cities and find random NPCs lying dead on the ground after guards caught them stealing a loaf of bread. No, really. 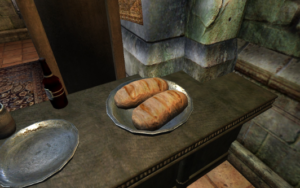 Similarly hungry NPCs will sometimes go hunting if they are hungry and be killed by bears or wolves as they explore the wilderness and as a result, you can also sometimes also find random dead bodies all over the woods. It’s worth noting at this point that all of this happens without any direct player input, meaning it can happen completely at random.

According to Oblivion game designer Emil Pagliarulo, as annoying as this can be, the radiant AI present in version of the game we got to play is actually less impressive than it was in early versions. You see, the Radiant AI was originally supposed to be way more expansive, but NPCs kept doing things they didn’t expect.

For example some NPCs were programmed to be addicted to a drug called Skooma. Ignoring the ethical ramifications of programming AI to be addicted to a virtual drug for a moment, NPCs addicted to Skooma would make a beeline for a nearby drug dealer the moment they ran out of it and kill him. This would be hilarious if not for the fact that drug dealer was part of a quest and there was no way for the player to reach him before he was murdered by drug-addicted NPCs. 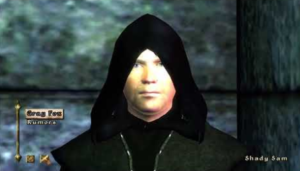 Pagliarulo would later note that stuff like this kept happening in early versions of the game to the point it made it almost unplayable, since the AI would routinely do shit like buy all of the stock from stores or punch each other’s dogs to death to settle arguments. To curb this, the Radiant AI was heavily scaled back in the final version of the game and the extent of what NPCs could do was severely limited so that the streets of towns and cities weren’t filled with angry skeletons who’d wandered over from nearby ruins to sate their skeleton bloodlust. 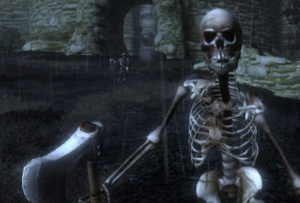