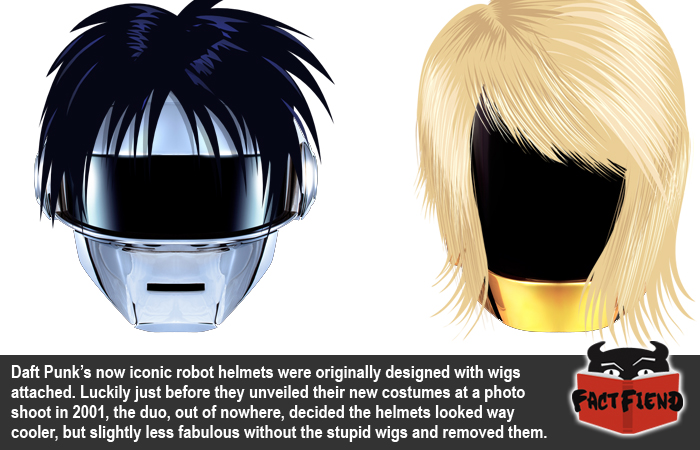 Here’s one for you, did you know that when Guy-Manuel de Homem-Christo and Thomas Bangalter, better known by, well, everybody as Daft Punk, first envisioned their sweet-ass robot outfits, they imagined that each one would sport a custom-made wig? For some reason though, the pair destroyed the wigs before anybody ever saw them and it remains an obscure, seldom discussed footnote in Daft Punk history.

To explain, almost from the start of their career, the duo that would eventually become Daft fucking Punk were pretty adamant that no one would ever see their faces while they performed. Since they didn’t yet have their cool-ass robot costumes the pair accomplished this by always wearing Halloween masks whenever they performed and by putting heavy black cotton bags over their heads during interviews.

After a while though it became clear to the duo that no one takes two French guys with bags over their heads seriously unless they’re being screamed at in grainy video footage by ISIS. So, the pair began to look for a more,permanent solution to not wanting anyone to know what their faces looked like that didn’t involve almost suffocating on a bi-weekly basis.

That solution came in the form of two, custom designed robot suits thrown together by some of Daft Punk’s artsy fartsy French friends. The robot suits, along with looking fly as all hell, also featured helmets with everything from air-conditioning to a personal radio crammed inside them. Weirdly, those now iconic robot helmets each originally sported a rockin’ set of flowing locks when they were first commissioned. Bangalter’s mask had curly brown hair, while Homem-Christo’s sported, sleeker, yet equally as fabulous and bodacious straight brown hair. If you know which name belongs to which member, you’re either a Daft Punk super-fan or one of their relatives. Either way, kudos to you.

However, literally at the last possible second, just before they were about to reveal their new look to the world in a 2001 photo-shoot, the duo ripped off the wigs, feeling that the robot costumes look better when they had Lex Luthor’s haircut.

Sadly, due to how secretive Daft Punk is, there is no known image of the pair in costume while wearing wigs, which we guess is lucky since if we ever found that picture and uploaded it to this website, we’d have the living shit sued out of us when everyone looking at it had their eyes turn into ice cubes made of gold to cope with the inherent amount of coolness they were currently seeing.

For more musical trivia, check out our article about how everybody assumed Elvis was black when they first heard him sing and how they requested his first single so often the DJ played it on repeat for two hours straight the first day it was played.