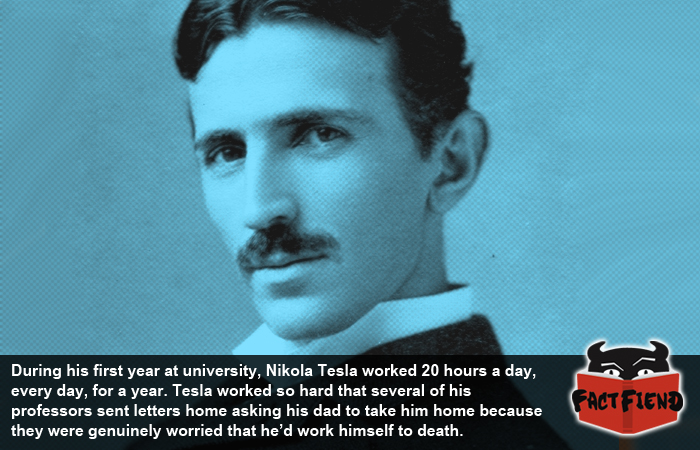 Thanks to the efforts of websites that treat the advances of science like a commodity they can trade for likes on Facebook, the work of Nikola Tesla has never been more well-known. However, few people really know anything about the man other than that he once claimed to have built a death ray and that he was obsessed with pigeons, for example did you know he never slept?

In the handful of interviews Tesla granted over his lifetime, he openly claimed to have never slept for more than two hours at a time during his entire life. Though this sounds ludicrous, according to people who knew Tesla personally, the guy really did seem to be able to function with minimal, Batman levels of sleep, with many of his peers claiming to have seen him work for literally days at a time without a break or resorting to injecting amphetamines directly into his eyes to stay awake. Then again, those reports could just confirm our personal theory that Tesla pioneered a method of sleeping with his eyes open so that the world wouldn’t be robbed of their beauty  that also looked like he was working and never told anyone.

Tesla’s almost superhuman ability to function on the same amount of sleep enjoyed by new mothers and people with only 3 days left of their Netflix subscription was perhaps most pronounced during his first year of study at the Graz University of Technology in Austria. According to Tesla’s own notes, he woke up every day at 3AM, the time most students are stumbling in drunk, and worked until 11PM every single day ignoring everything from Christmas to his own birthday.

While this may sound impossible, Tesla’s grades for his first year of study as well as first hand accounts from his peers confirm that Tesla really did work almost 24 hours a day. Along with receiving literally the highest grades possible for every single class he took, with many of his professors openly admitting that his work was so far ahead of his classmates that he deserved an even higher grade than they were legally, ethically and physically able to give. Yes, Tesla worked so hard, his professors lamented that they couldn’t give him a better grade than fucking perfect.

Tesla also completed twice as many exams as he needed to (all with a perfect grade) because he completed all of his other work early and got bored. Because this is Nikola Tesla we’re talking about, rather than sleeping or something lame like that, he of course decided to casually master another area of science so that he could get one step closer to punching the mysteries of the universe in the dick with his mind.

Tesla’s performance and Terminator like determination in class prompted many of his professors to send letters home to his father begging him to withdraw his son from school so that he wouldn’t, well, die. Tesla Sr took this advice to heart and when his son came home showing off his flawless results, he acted indifferent towards them, crushing Tesla’s spirit and possibly causing him to rethink that “World’s Greatest Dad” mug he’d bought a year earlier. In a heartbreaking twist, Tesla never found out that his father had intentionally not acted proud of him to stop his heart from exploding like a wet grenade until after he’d died and he found the letters from his professors amongst his belongings.

Partly due to his fathers lacklustre response to his grades and partly to spite a dickish German student who mocked his inability to have fun, Tesla stopped giving a shit during his second year of university, turning his attention to gambling, which he of course became amazing at, losing and then subsequently winning back his entire tuition over the course of the next two years.

In the end, Tesla never graduated from that university, however his fractured sleeping habits remained with him for the rest of his life and on the rare occasions that lab assistants would find him napping, Tesla would snap himself awake and claim that he was simply charging his batteries. Which, amongst other things explains why there are so many pictures of Tesla looking like he’s asleep in front of giant fucking machines firing lightning bolts into the sky.

For another lesser known fact about Tesla you won’t have seen covered by websites who aren’t willing to do that thing called “research” why not read about the time he once set fire to a bunch of butterflies, for science.