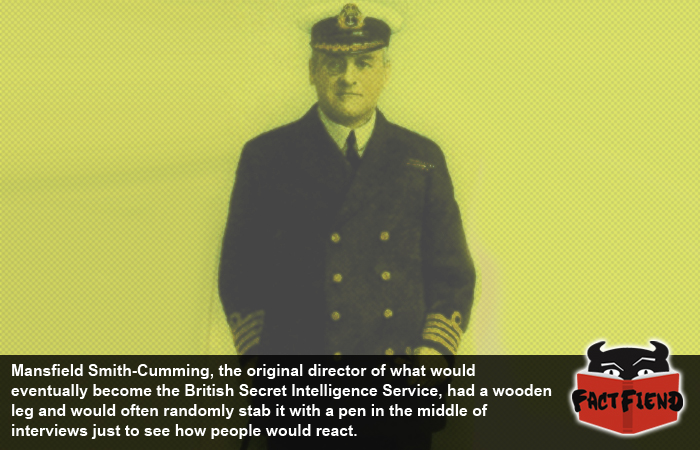 In the world of British espionage and covertly strangling people with piano wire, Mansfield Smith-Cumming is one of the best known names, partly due to the impact he had on what eventually became MI6 and partly because he was fucking insane.

From 1909 to 1923, Mansfield was the head of the Secret Intelligence Service, responsible for, amongst other things, watching over agents stationed abroad and making sure they didn’t blow their cover. As an interesting side note, it’s recorded that the SIS was mainly founded because assholes across Britain wouldn’t stop accusing every German person they met of being a spy and the government needed an official agency to deal with the torrent of accusations they received every single day. But that’s a story for another day.

During his tenure as the head of SIS, Mansfield quickly developed a reputations as an eccentric and he could often be found hobbling around SIS headquarters wearing a golden monocle using a can that also happened to contain a sword that he liked to wave around to keep people on their toes. Out of SIS headquarters, Mansfield would drive his Rolls Royce around London using a special license plate reserved for royalty so that he wouldn’t get pulled over, laughing his ass off the entire time.

Unsurprisingly, Mansfield’s penchant for driving his car like he stole it from the Flash, led to him crashing his prized Rolls Royce in 1914, which sadly claimed the life of his son. During the accident, Mansfield’s leg was crushed to the point of uselessness, requiring it to be amputated. Though it’s commonly stated that Mansfield cut off his own leg using a small penknife sharpened against the denser of his two testicles, hospital records show it was amputated the next day by an actual surgeon. Which didn’t stop Mansfield from fucking with people by making up something ridiculous like he accidentally stepped in a puddle of barbecue sauce and fell into a den of wolves every time someone asked how he lost his leg.

Not one to let something like the death of his son and the loss of a limb get him down, Mansfield took to travelling around his office using a scooter he stole from a child, using his wooden leg to slap people aside. During meetings with people who weren’t aware of the fact he needed to hop in place every time he took a piss, Mansfield grew quite fond of randomly screaming at the top of his lungs and stabbing himself in the leg with a pen, you know, just because.

Mansfield would reportedly do this during interviews with potential spy recruits to see how they reacted to something unexpected, dismissing them immediately if they had the totally human reaction of freaking the hell out. Because how else could a man with unlimited access to the most cutting edge technology available to Britain at the time possibly test how well people coped with stress?

As much as we’d like to say that Mansfield’s unorthodox methods resulted in the SIS producing spies half-decent spies capable of knife-hand slapping hired goons in the dick while intermittently shotgunning vodka Martinis, that’s not really how things worked out. In fact, the spies produced by the SIS in its early days were so inept that one of them once got lost in a hotel for an entire day because they got out of an elevator on the wrong floor and couldn’t find anyone who spoke English to help them get out. Then again, Mansfield himself once successfully posed as a German businessman during an intelligence mission with the British Navy when he didn’t speak German, so maybe he just expected his recruits to be as good as he was.

For more spy related tomfoolery, why not read about how James Bond, the quintessential British spy, doesn’t like drinking tea.