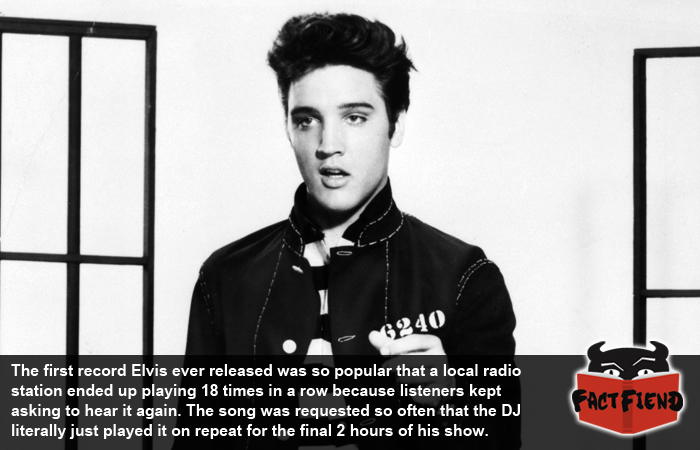 Despite the fairly crippling handicap of being dead, Elvis is still arguably one of the most famous musicians on the planet, which is understandable when you realise that literally the first song he ever recorded was so popular a DJ played it for two hours straight.

We don’t mean that Elvis somehow bribed the DJ to play his record or something like that, listeners who heard it just liked it so much that they wouldn’t stop calling in to request to hear it again, prompting the DJ to simply play it on repeat for the last stretch of his show to shut them the hell up.

If you’re not intimately familiar with Elvis lore, the song we’re talking about is of course, That’s All Right (sometimes called That’s All Right Mama) a cover Elvis performed of an earlier song performed by Arthur Crudup on a whim because Elvis did what the fuck he wanted. The story goes that Elvis started dicking around on his guitar during a recording session and broke out into a spontaneous rendition of the song. The producer, amazed by the crackling sexual energy suddenly radiating from Elvis’ crotch, walked into the booth and asked him to start playing again so that he could record it.

The record was then given to a local DJ called Dewey Phillips, who after playing it once was swamped with calls from listeners demanding to hear that kick-ass song another 30 times in a row. Exactly how many times Dewey played the song in a row isn’t clear, with different sources offering a smorgasbord of answers ranging from 12 to a fuck-ton.

Interest in the record was so fierce that Elvis was brought into the studio that night to give an impromptu interview, during which Philips casually asked Elvis which school he attended and why he wasn’t currently joined at the hip with half the cheer leading squad. Far from being pointless small talk, this question was a roundabout way of getting Elvis to reveal his race to listeners without actually asking him what color his dick was, something known in the radio business as a “big no no”. You see, Dewey’s show was immensely popular with the black community and he was known for playing records by both white and black musicians, however, when he played Presley’s record the vast majority of people calling to hear it again had assumed that Elvis was of a more, dusky complexion. Which is why Philips had to ask the question to subtly tell his audience they were all actually grooving to the sultry, mellow tones of a pasty white dude.

Which makes sense when you realise that Elvis was one of the first white musicians to be influenced (or at least to admit to being influenced) by the sound and songs of black artists , hell, the song Elvis was covering in the record was originally recorded by a black dude.

There’s a reason Elvis is revered as an icon of civil rights and earned the respect and admiration of every black musician and entertainer he ever met including but not limited to, BB King, Sammy Davis Jr, James Brown, Fats Domino and Mahalia Jackson. A group of people who’ve collectively changed music more than iPods, Walkmans and Guitar Hero combined. Hell, in regards to Fats Domino, when a journalist referred to Elvis by his famous nickname of “The King of Rock and Roll” Elvis cut them short to point out that Fats Domino was the real king. Elvis disliked the shit out of that nickname because he knew he didn’t invent Rock and Roll, he knew that it was a genre that had been created by and then perfected by the black community and the media at large, which was just shockingly racist back then, wouldn’t admit it.

But hey, that’s a story for another day, in the meantime, please enjoy this medley of classic blues songs.

The Ancient Greek Who Flashed Her Way to Freedom

How a single word created the Beanie Baby craze