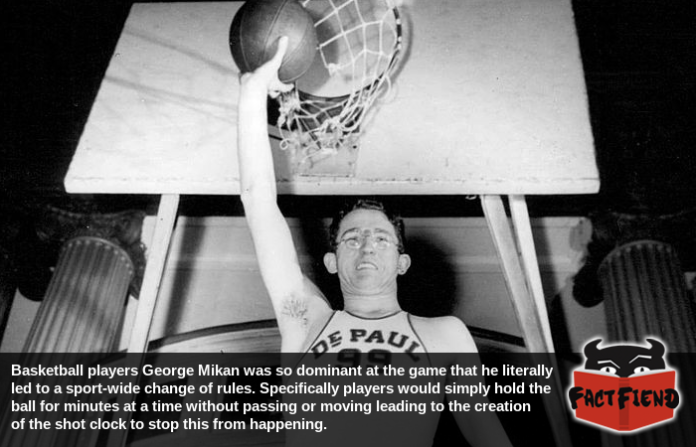 Basketball is a sport dominated by men who could be diplomatically described as refrigerator shaped. A fact that can largely be attributed to one man, George Mikan, a player so dominant opposing players simply stopped playing the moment they got the ball.

Standing an imposing 6ft 10 inches tall and weighing some 250 pounds at his competitive peak, Mikan was the first so-called “big man” of basketball. Oddly while you’d think men the size of a giraffe’s leg would be a natural fit for basketball, the decision to put Mikan on the court was initially scoffed at by fans of the sport. Why? Well Apparently people back then thought men Mikan’s size would to be too awkward to play basketball and as a result, he ended up playing with people half his fucking size.

To be fair to those detractors, they did kind of have a point and Mikan’s initial foray into basketball wasn’t exactly graceful. Something that had a lot to do with the fact that Mikan wasn’t confident in his size which his coach remedied by making him take dance lessons. Specifically ballet, where his coach would have him dance with the shortest girls in class to learn how to better control himself around people he could crush with a single swat of his giant man-hands.

As a result of his coach’s gentle, erm, coaching, Mikan became a formidable asset to his university team to such an extent their entire defence and offence revolved entirely around utilising his gargantuan frame and massive reach. For example on defence Mikan was tall enough to slap aside balls before they went into the net, meaning he could simply stand in front of it when the opposing team had the ball and basically neuter their entire offence. 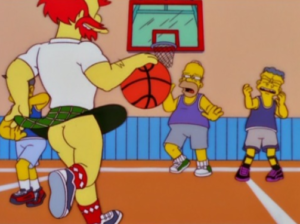 If you’re currently thinking, wait, isn’t that against the rules? It is, thanks to Mikan because until he came along there wasn’t a rule in place specifically preventing it because everyone assumed nobody was tall enough to do it. Opposing teams eventually got so pissed off with Mikan doing this they eventually just made it against the rules. Seemingly out of frustration with how big his basketball-dick was, opposing players would continually foul Mikan hoping to take him out. As you can probably guess given that he was twice the size of everyone on the court, this rarely worked out. Hell, even when he was injured Mikan would still play and due to his sheer size he could still score fairly effortlessly by standing by the net, asking his team to pass him the ball and just dropping it in the net.

But here’s the thing, this isn’t the only rule change Mikan effected because opposing teams quickly realised that they could completely shut him down by simply never passing the ball. Doing this meant that the only thing Mikan could do to get the ball was foul the person doing this, putting his team at a disadvantage. This tactic was so prevalent that especially brazen players went as far to just sit on the ball when their team was winning. A fact that as you can imagine, made games about as exciting to watch as paint drying on YouTube in HD.

Games involving Mikan were known to be especially dull whenever the opposing team got the ball because they’d just stop playing, effectively stopping the game (and by extension, Mikan) in its tracks. This understandably pissed off fans who’d boo endlessly whenever this happened, but since there was no rule against it there wasn’t really anything anyone could do. Even Mikan’s giant ladder-arms could do nothing to stop this tactic and he was frequently reprimanded for outright tackling other players to try and get the ball back.

Fearing that stalling tactics like this would turn off fans, a solution was found in the form of the shot clock which basically penalised any player who held onto the ball for too long. A rule literally implemented as a direct result of how dominant a player Mikan was. Which, well, is a hell of a fucking legacy if you ask us.