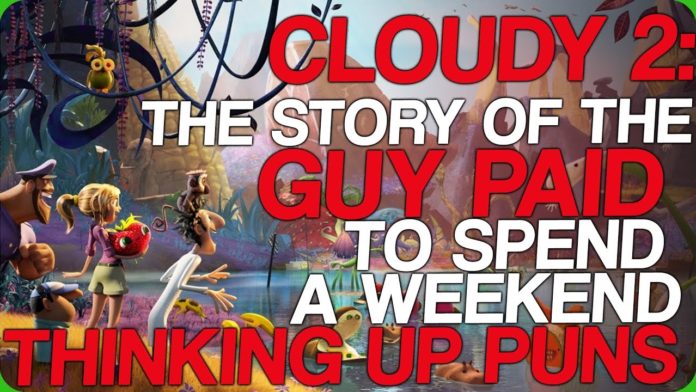 Though the Cloudy With a Chance of Meatballs sequel wasn’t as well received as the original film in the series, it’s still a pretty god-damn awesome movie. Part of the movie’s appeal (for children at least) was the sheer amount of puns it contains, amazingly, almost all of them were thought up in a single weekend by one guy.

And this is a Cucumbird, which we mentioned specifically because we’re curious about whether or not profanity filters will pick up that word.

There are literally dozens of these and they range from stupidly brilliant, Watermelophant, to so painfully groan-worthy they cause actual hernias, Corn dog.

However, a lot of the more, lacklustre puns (we’re looking at you, apple pie-thon) can be forgiven when you realise that they were all thought up in a single weekend. Craig Kellman, the lead character designer for the movie, actually spent an entire weekend combining animals and food at home while thinking up the most stupid puns he could think of. According to Kellman himself, his original list featured well over 100 different ideas, though only a few made it into the final version of the film. We’d like to point out that one of the creatures that made it into the final movie was literally just a sentient marshmallow called a “marshmallow”, so we dread to think how bad some of the one that didn’t make it into the movie were.

But yeah, if you ever watch the movie and find yourself groaning at the puns, just remember, most of them were thought up by one guy in two days.