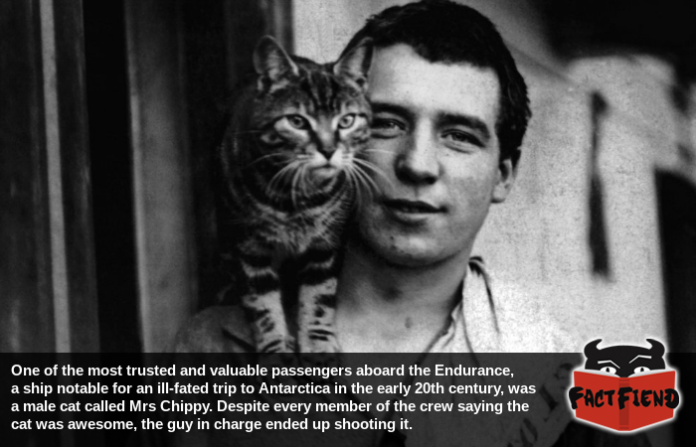 People have a tendency to get like, super attached to their pets, which makes sense given that they provide unconditional love, companionship and are all kinds of fuzzy. In fact, we’d guess that there are many people out there who’d do anything for their furry friend short of kill someone. A thought we assumed must have occurred to a guy called Henry McNish at least once when some dickhead had his cat shot.

That cat was a baller-ass tomcat known oddly enough as Mrs Chippy who accompanied McNish aboard a ship bound for Antarctica called the Endurance. According to legend the cat was brought along for the ride when McNish, a carpenter by trade, found it sleeping in his toolbox. Something he took as a sign that the feline wanted to join him on the trip instead of the more likely assumption that the cat was just being an asshole and shitting on his hammer or something. 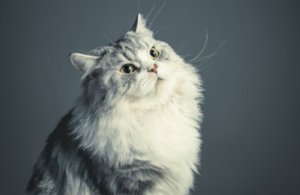 The at the time unnamed cat quickly proved itself to be a worthwhile addition to the Endurance crew catching countless mice that would have otherwise nibbled on their supplies. For the most part though the cat spent the majority of its time following McNish around, leading many aboard the Endurance to compare it to an overbearing housewife and the coining of its name, Mrs Chippy (Chippy being a slang term for carpenter at the time) with it only being discovered later that the cat was actually male.

Mrs Chippy was deemed to important to crew morale that after he randomly jumped out of a window into the ocean one evening, an officer on board ordered that the entire ship be turned around to fish him out of the sea.

However, all this cat-support ended when the ship got stuck in some ice and the ship’s captain, Ernest Shackleton, decided that the member of the crew who’d ensured their food stores didn’t get covered in rat shit wasn’t worth trying to keep alive. As such, he told his crew that Mrs Chippy be given a can of sardines then immediately shot in the head. 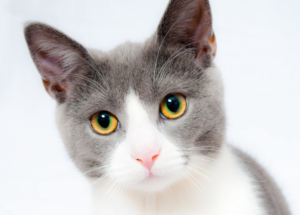 As you may have guessed, McNish wasn’t happy about this and was reportedly all kinds of pissed off with Shackleton, spending the entire rest of the trip angrily scowling at him. But here’s the really bro part, McNish was so all-consumingly pissed off with Shackleton that he never stopped being annoyed at him. In fact, it’s reported that even years later literally the only thing McNish would say when asked about the trip was that Shackleton was an asshole for shooting his cat before asserting that the group would have never made it without his furry friend.

This friction between the two men culminated in Shackleton conveniently forgetting to put McNish’s name forward for a Polar Medal even though his carpentry skills were what allowed the crew to turn the lifeboats into sleds and thus, escape the dire situation they were stuck in. Not that McNish gave a shit, always telling his kids that he just wanted his fucking cat back.

A wish they were able to partially fulfil upon his death by having a bronze statue of Mrs Chippy put atop his final resting place, allowing the two to, at least symbolically, spend the rest of their time in the afterlife together. And if you don’t think that’s the most adorable shit in the world, you can fuck right off.