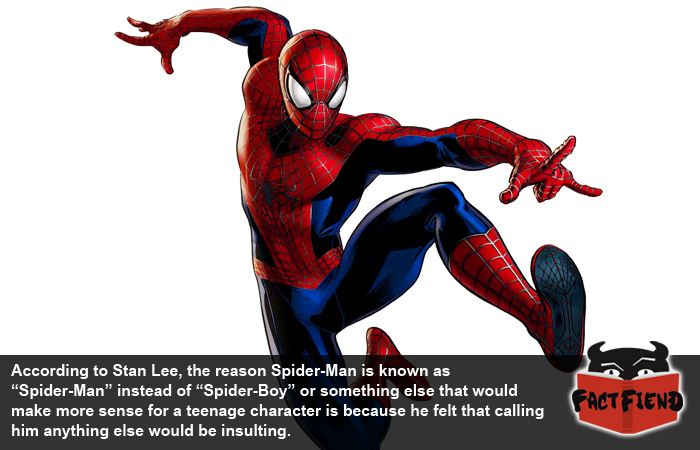 Spider-Man is one of the world’s most recognisable – and now that his film’s are no longer being made by Sony – most bankable superhero. But have you ever wondered why a superhero best known for being a teenager has a name like “Spider-Man“? Well apparently it has a lot to do with Stan Lee’s refusal to take any shit.

The story goes that back in 1960’s Marvel comics tasked Stan Lee with coming up with a new hero after the popularity of his latest superhero creation, The Fantastic Four, a comic about a family of heroes who are seemingly always competing to see who can look like the smuggest asshole on Earth.

Lee took a look at the sales figures of their latest releases and after noting that teenagers were the fastest growing audience for the medium, came up with an idea for a teenage superhero with spider powers. Lee took the idea to his boss who promptly began shitting just all over it. Lee’s boss tore apart almost every aspect of the character, telling him point blank that the comic would never sell because people don’t like spiders.

In regards to the teenager angle, Lee’s boss was similarly sceptical that such a comic would sell, countering Lee’s comments that nobody wants to read about flawless, invincible heroes punching things into orbit with no effort by saying that nobody wants to read a comic about a hero with acne either. When Lee tried to argue that teenagers would probably relate better to a character who struggled with real life problems like girls, bullying and making friends, his boss found it hard to understand why, presumably because he was a dick in high school.

After realising that Lee wasn’t going to leave his office until he got permission to make this weird spider hero, his boss begrudging said that he could write a story for the character, provided it début in the comic, Amazing Fantasy. Lee accepted and wrote the story, even leaving a cliffhanger for the next issue, completely unaware that Marvel were planning on shit-canning the Amazing Fantasy series in like, a week. We’re guessing that after Lee learned that sales figures for that issues found that it had sold more copies than any comic Marvel had ever published up to that point his boss got a subscription to Amazing Fantasy in his inbox addressed to Lee’s wrinkly nutsack. 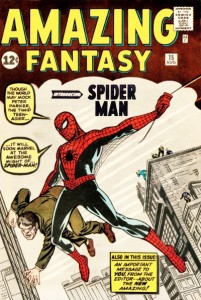 Sheepishly, the same executive who’d told Lee nobody would like Spider-Man came back and gave him permission to write an entire series about him, promising not to question his authority or moustache ever again.

So where does the man part of Spider-Man come into this? Well one of the reasons the executive we mentioned previously didn’t think a teenage hero couldn’t work as a stand-alone character was because every teenager in a comic up to that point had been relegated to the role of sidekick like Superboy, Batgirl and Aqualad. Lee staunchly refused to follow suit with Spider-Man, consciously making the decision not to call him “Spider-Boy” or something similar because he didn’t want anyone thinking his hero was inferior to other heroes with “Man” in their name like Batman, Superman and Aquaman.

Along with sticking it to his boss, the decision also made sense within the context of the Spider-Man universe in that it gave the hero a plausible way of denying that he was Spider-Man out of costume because who would ever think that a nerdy dipshit like Peter Parker, a guy who is almost perpetually getting his ass kicked by a guy in a turtleneck … 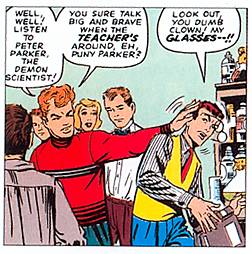 Could possibly be Spider-Man, an impossibly cool, wise-crackin’ hero who can dodge gunfire and slap someone with enough force to send their teeth rocketing into a concrete wall at Mach 3 and bench a bus.

It’s similar to how Superman hides the fact he’s Superman by being a bumbling dumbass whenever he’s pretending to be Clark Kent. Nobody in his universe ever thinks the two are the same person, despite them looking totally alike, because they can’t fathom why an invincible god-like being like Superman would bother disguising himself at all, let alone as a total dipshit.  Aren’t comics fun?