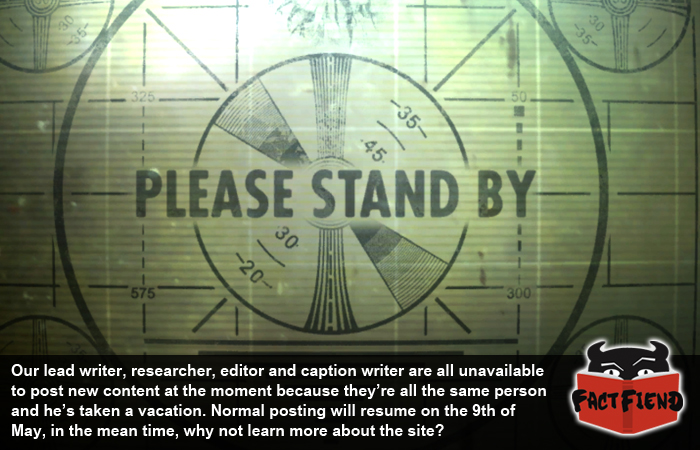 I’m going to break kayfabe for this post, since I’ve broken just about every other formatting rule while writing for this site and may as well go for the high score. My name is Karl Smallwood and I’m responsible for every piece of content you can find in our archives and I’ve taken a vacation to China. It will mark the first time I’ve ever taken more than 3 days off in a row from writing in the last 5 years and I’m very excited, but because I know people like to read this site to learn new things, why not learn a little about how this site came to be?

3 years ago I was approached by a friend called Shell who is the editor of our sister site, TopTenz, which I also contribute articles to, to create this site after he noticed that I liked posting dumb shit I’d learned on Facebook, like this …

Noticing that the “fun facts” I posted most every day were kind of popular, Shell approached me with the idea of creating a site to host them, which I agreed to with a couple of stipulations I absolutely would not budge on:

Shell agreed and we created the site you’re currently reading, he agreed to work on things on the back end and I agreed to create research, write and edit every piece of content. After a year or so, Shell handed full control of the site over to me, so I’m now the sole person running everything, though I still use the pronouns “we” and “ours” out of sheer habit. It also makes it sound like I have an entire team working with me, which makes me feel important.

So why am I telling you this? Well, I really enjoy running this site, it makes some money, but it’s never been about that. I just like having an outlet for the cool shit I find out that might not otherwise make it into one of the many articles I write elsewhere. In an ideal world I’d have written 10 articles in advance, scheduled them to be posted on the days I’m not here and nobody would have known, but I simply don’t have time to do that. I’m contracted to write 4 articles a week elsewhere on top of a job in the real world where I polish spoons (not a euphemism). Because I enjoy eating and paying rent, I’ve had to focus the time I’ve had before this vacation on other, more profitable ventures.

However, I didn’t want to just leave the website blank for 10 days, so for anyone who visits Factfiend and decided to click this link to learn more about it and me, thank you. I will be heading to China tomorrow to visit a friend and when I return, I’ll post a bunch of pictures of pandas on our Facebook page and then probably get back to updating.