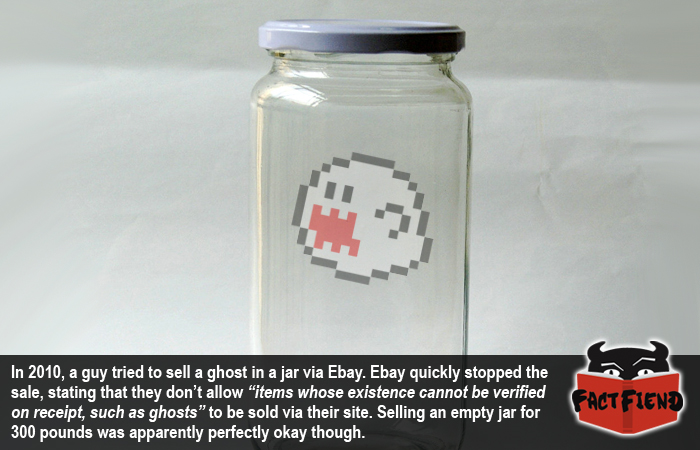 During the many years Ebay has been a thing, people have tried to sell everything from fighter jets to previously undiscovered species through the service. One of the most unusual things someone has tried to sell through the site was a ghost, though not for the reason you’re thinking.

It’s likely that when you first read the title to this piece your gut reaction to learning that you can’t sell a ghost on Ebay is, “yeah, no shit, Sherlock”. But did you ever stop to think why the site wouldn’t allow such a sale to take place? It’s not like the site hasn’t seen weird sales before, what specifically about a ghost was worse than selling say, an entire town, which is a thing that totally happened by the way when someone sold Bridgeville, California via the site in 2002.

That’s the exact question that popped into Michael Fawcett’s head when his ghost in a jar (which he was selling as a joke to raise money to punch cancer in the dick) was removed for breaching Ebay’s terms of service. According to an email Fawcett received from the site, the sale of “intangible items” is strictly prohibited on Ebay, presumably to stop people from selling boxes labelled “happiness” or something like that.

But this is where the whole situation gets, odd, because although Ebay wouldn’t let Fawcett sell his ghost to raise money for charity, they have, in the past, allowed people to sell “haunted items” for pure profit. We’ll be honest, if you’re claiming that you’ve caught a ghost inside a jar, you could probably also make the case that, that jar is also probably a little bit haunted. We sure as hell wouldn’t want to use it.

Perhaps the best part of the whole thing was that when Fawcett had his listing removed, you could tell that Ebay were really taking the piss with their reply, but because of the professional veneer coating their response, you couldn’t prove it. The full quote from Ebay about why they removed the ghost for sale is as follows:

“We don’t allow the sale of intangible items or items whose existence cannot be verified on receipt of them, such as ghosts, souls, or spirits”

They then ended the email with a pun, stating that although they understood that the listing was posted in “good spirit” (ha!) before complimenting him on his philanthropy, which is kind of a dick move when your email is literally about how you’re about to take down their listing to raise money for a cancer charity, but hey, that’s business!