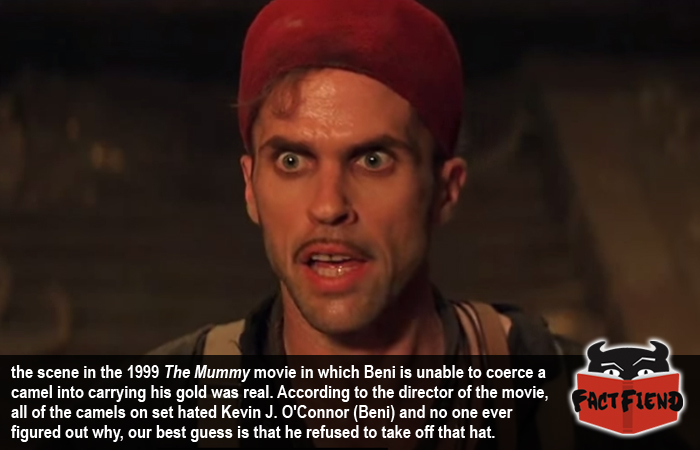 If you’ve no idea who the shit eating face above belongs to, allow us to introduce you to Beni, the guy who spends the entire The Mummy movie being a colossal ass-hat to Brendan Fraiser’s character for no apparent reason. Weirdly though, it was the camels working on the movie set who ended up hating the poor guy the most.

We don’t mean within the context of the film the camels hated the character of Beni, we literally mean that they hated the guy who played Beni, Kevin J. O’Connor.

Yep, for reasons nobody has ever been able to discern, O’Connor found himself being given the cold shoulder and a big ol’ case of the stink-eye by every camel on set. Considering this was a movie that was being filmed in Egypt, you can imagine how terrifying this must have been for the guy, he probably couldn’t leave the dressing room without being showered in camel phlegm.

So, when the time came for O’Connor to film a scene in which he had to try and coax a camel into following him while he tried to attach a huge bag of gold to its back while it adamantly refused, there was practically no acting involved, O’Connor genuinely couldn’t coax the camel into listening to him because it apparently freaking hated him.

As we mentioned above, no one ever figured out why exactly the camels wouldn’t listen to O’Connor, however, we think we may have actually figured it out, by which we mean, we watched this video of O’Connor violently slapping his camel (not a euphemism) in another scene where he’s trying to race somebody on it.

Our guess is that the other camels saw that and didn’t realise O’Connor was acting and decided to collectively make his life a living hell for the remainder of the time he spent in Egypt. Either that, or maybe there was something else the camels just didn’t like about him. 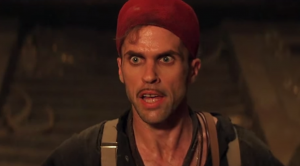