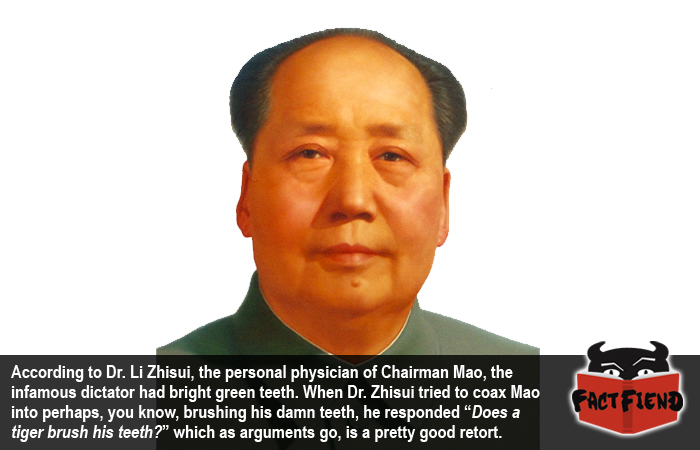 The title of this piece isn’t hyperbole or our attempt at crude, cartoonish humor, Mao Zedong, mostly known by his Wu-Tang Clan name of Chairman Mao literally had green teeth.

If, like us, your first question is, wait, how? The answer is pretty simple, Mao never freaking brushed his teeth. Under normal circumstance, never brushing your teeth would result in them turning a garish shade of Simpson skin yellow, however, although Mao didn’t brush his teeth, he did rinse them with a shit-ton of green tea.

As you can imagine, several decades only cleaning your teeth by swilling a boiling hot green liquid around your mouth isn’t something even the most corrupt Chinese doctor would recommend and almost as soon as Mao’s physician, Dr. Li Zhisui saw the state of his patients teeth he immediately recommended that he try brushing them. Leading to the scathing retort noted in the image at the top of this page.

Just so we’re all on the same page about the horrifying stink Mao exuded from his mouth hole, along with never brushing his teeth, the illustrious dictator chain-smoked like a chimney and he ate a lot of fish and fried meat. On top of that his gums were also so infected from years of mistreatment that they constantly leaked a thick, gooey pus. If you want an idea of how badly this guy’s breath smelled, fart in a jar and breath it in through your mouth.

Perhaps the most curious part of this whole thing is that Mao was an absolute pimp with the ladies, according to Dr. Zhisui, Mao slept with hundreds of women throughout the years and his sexual appetite and prowess was veritably Chamberlain-esque. Then again, we’re guessing it’s a lot easier to attract the ladies when you run an entire country, even if your teeth do like they attending a costume party as the Ninja Turtles.